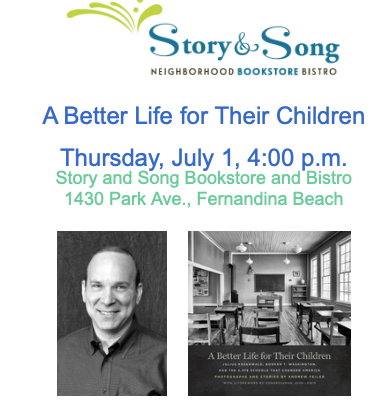 Between 1917 and 1937, close to 5,000 schools were constructed across fifteen southern and border states to provide public education for African-American children. Our very own Peck School is one of only 500 that survive.

Julius Rosenwald, Chief Executive of Sears, Roebuck & Co. at the time, and Booker T. Washington, the founding principal of Tuskegee Institute, partnered with black communities across the segregated South to build what came to be known as “Rosenwald Schools.”

The story – and history – of these Rosenwald schools has been captured and preserved in photographs taken by Andrew Feiler for his new book, A Better Life for Their Children: Julius Rosenwald, Booker T. Washington, and the 4,978 Schools That Changed America. To tell this story visually, Feiler drove more than twenty-five thousand miles, photographed 105 schools, and interviewed dozens of former students, teachers, preservationists, and community leaders in all fifteen of the program states.

On Thursday, July 1 at 4 pm, Andrew Feiler will talk about his work and share his photos at Story & Song Bookstore Bistro. A fifth-generation Georgian, Feiler is an award-winning photographer whose work has been featured in museums, galleries, and magazines and is in a number of private collections. His photography is focused on the contemporary complexities of the American South. More of his photography can be seen at andrewfeiler.com.

All are welcome to attend this free author event. Anyone who attended Peck or any other Rosenwald school is eligible to win a free copy of Feiler’s book. For more information, call (904) 601-2118.