Lions in the Water 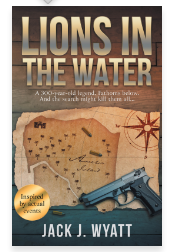 In writing columns for the Observer, I sometimes get to review a new book at the author’s request. It’s fun because it gives me a chance to read something I might not otherwise notice. This time the book is Lions in the Water, a new release by Jack J. Wyatt. Wyatt is a local Fernandina Beach resident.

Wyatt has written an action novel that may remind you of Clive Cussler (one of Wyatt’s influences). Lions in the Water is the tale of a hunt for a Spanish treasure ship. And it’s set on Amelia Island. If you don’t otherwise pick up on this, there’s a saloon with a bartender named Johnny. Cumberland Island is also the setting for part of the story. Wyatt is careful not to be an island name dropper. Although there are things you recognize, the effect isn’t intrusive.

The action begins when a local shrimp boat finds gold and silver coins in its nets after a trawl. They don’t know precisely where the coins were picked up because the nets were dragged a far distance. However, Jed, the main character, is intrigued enough to do some research and learns that lions on the coins were common for Spanish coinage. A secondary character finds another piece of treasure and puts in up for sale on the Internet. This draws the attention of someone who has a family history interest in the treasure ships.
From there the story moves quickly to introduce all of the players (good and bad folk) who will be involved in the treasure hunt. There are those who want the treasure found for family reasons, those interested in the treasure itself, and those who don’t initially realize there is a treasure. The ending is a thrilling chase and confrontation that seems plausible. An epilog does hint of a sequel.

What gives this book a unique twist adding interest is that Wyatt uses a true story of an English pirate and a Spanish treasure ship and weaves his story around it. I looked up the ship Whydah and found that Wyatt’s telling is accurate to the historical record. The ship ended up sinking off Cape Cod in a fierce storm. Wyatt has introduced reasons for the voyage north that may or may not be true but that give his story credence.

Lions in the Water is available in various formats including a Kindle download. The Book Loft will host a book signing by Wyatt on August 15, COVID-permitting.

Lions in the Water is an awesome page turning thriller! I couldn’t put it down and can not wait for the sequel.