Fernandina Beach City Commissioners (FBCC) on a 4-1 vote at their February 1, 2022 Regular Meeting approved Resolution 2022-22 approving a Facilities Use Agreement with Bradford Space, Inc. to use airport property for storage and testing of a small satellite thruster device on specified dates in 2023.  The space needed:  the size of a parking space.

Bradford Space, Inc., is a high-tech global developer and manufacturer of satellite control sub-systems and components. This corporation is competing for award of an international contract to conduct analysis and testing of a small satellite thruster device with representatives from the United States and Israel.

Contingent upon award of this contract, Bradford Space is requesting use of property at the Fernandina Beach Municipal Airport for storage of a small satellite thruster device between the dates of March 1, 2023, and September 1, 2023. During this storage period, the stored device would be placed and tested during a two-week period within the aforementioned date range. The testing conducted would be for approximately five minutes in duration for each individual test, totaling less than one hour of operation time for the device over the two-week testing period.

This small device, the size of two coffee cups stacked together, can be stored in a container the size of an automobile parking space. The proposed storage location within this facilities use agreement is adjacent to Closed Runway 18/36. In this location, the storage of the facility would not conflict with any other uses of airport property or airport operations. Based upon sound modeling from Bradford Space representatives,(see below), sound from testing is not anticipated to be noticed or audible to individuals outside the audible rings indicated on the exhibit. There will be no use of hazardous material(s) other than routine fuel used for operation of the small thruster device. 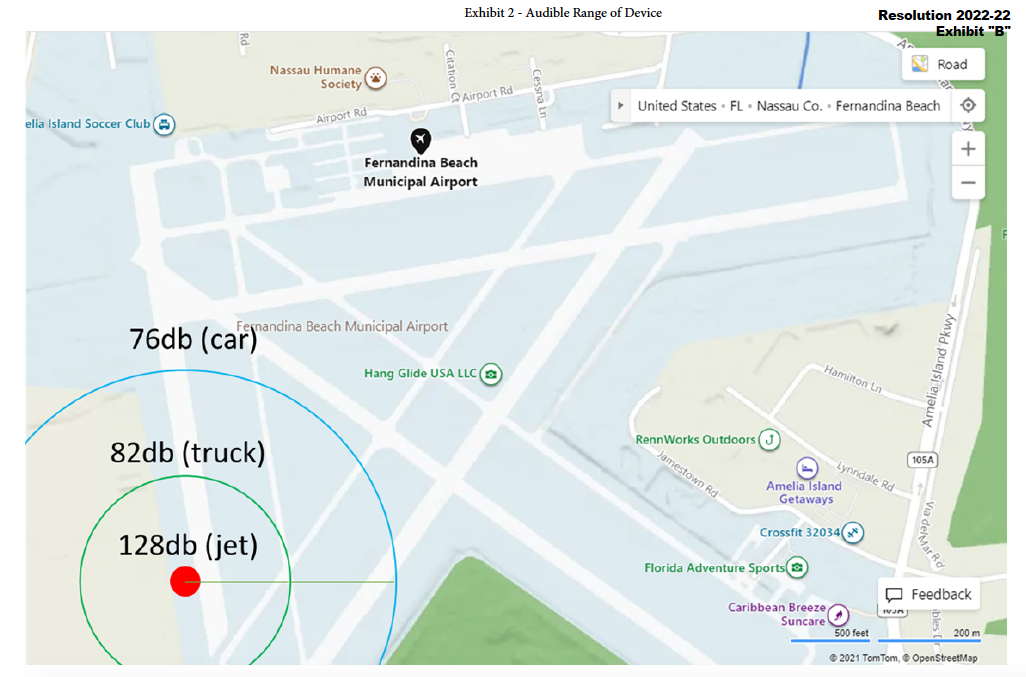 In response to a question from Mayor Mike Lednovich, Airport Manager Nate Coyle said that Bradford plans to run 5-6 tests of 5 minutes duration each, totaling an hour. Testing could be completed within 1-2 days, but the 2-week lease was requested in case additional time was needed.  Coyle stressed that this is a very small device that can produce 100 pounds of thrust, compared to a Gulfstream 4 airplane that can produce 6,000-9,000 pounds of thrust.

Vice Mayor Len Kreger said that this opportunity was brought to the City by the Nassau County Economic Development Board and that it fits well within the Airport Master Plan.  “I think it’s important that we move forward with economic development at the airport,” Kreger said.

Coyle said, “It’s important to understand that this is a manufacturing operation.  We are not permitted as a space port.  There is zero interest in launching anything into space.”

Lednovich said he would not support this item.  “When I think of Vision 2045, I don’t think of ‘space industrial’ on the island.  I think we have enough industry on the island.  If it would be airport related, I would support it.  But this is aero space, a totally different animal.”

When the vote was called, only Lednovich voted in opposition.

The fee for use of property is based upon the airport’s non-aeronautical land lease rate of $0.35 per square foot (annually) and a conservative storage size of 10′ wide x 20′ long. City staff will confirm receipt of a current certificate of insurance showing the City of Fernandina Beach as additionally insured prior to storage of the device on airport property.

what kind of fuel does such a tiny device use to produce so much thrust?

The obvious question not answered in this article is whether the testing includes sending the rocket up into the air. How far will it go up? In which direction? Will it go over residential areas? What happens if it is off course? Etc.

There is no rocket to be launched.

I don’t think there is a rocket. It is just a thruster, a small engine if you will. Thrusters are attached to satellites and capsules to move them around once they arrive in space. They have no role in launching anything (as Coyle articulated). So the only issue is noise, which appears to be insignificant.

This activity is small, but they are looking for a place to manufacture and ship components down the road. That is where my concern is, and no one is questioning that. This island can’t handle any more industrial activity and trucks. They are launching something coffee cup size, but how large are the parts they plan to manufacture? I’ve seen windmill parts block up traffic. Do they need the Port to ship parts? Living in the Port area is becoming a nightmare with the trucks coming in and out. I’m looking for the rest of the story. Our Commissioners need to ask more questions.

Suzanne……they are not “launching” anything. It will just be a static test firing of a thruster engine for US and Israeli representatives who happen to have small satellites orbiting our planet. These satellites need thrusters to maneuver to different positions, avoid collisions, and eventually de-orbit to burn up in our atmosphere. Virtually everything that is launched has thrusters for stability and the aforementioned reasons.

Without thrusters, Apollo 13 would have never returned…..and 95% of the readers of FO are old enough to remember that (even if you didn’t see the movie).

This is nothing to worry about. Should it evolve further, we can address the impacts at that time.

Using the FB Municipal Airport for industrial, space-related testing operations is inconsistent with the mantra there are “no plans for expansion” of airport operations. While we can all appreciate the airport’s need to be financially self-sustaining, by what measure is industrial or commercial testing of ANY kind appropriate for our city and more specifically, this location? Did the FAA approve this? Were city and/or county residents with homes in the vicinity of the airport given an opportunity to weigh in on the matter? If commercial or industrial testing is needed, let Bradford Space find a suitable location elsewhere. There are UAS test sites around the country. Applied Technical Services in Jacksonville actually focuses on aerospace testing. And by suitable – let me be clear. Fernandina Beach is a small city whose residents need to coexist with non-city residents and businesses on the small barrier island they share. A key feature of our fair city is that it is also home to a beautiful but fragile island ecosystem. Our city, and the fragile barrier island it sits on, are located near a port, two paper plant operations, a national seashore and a nuclear submarine base. If any resident of our city or island thinks that this will be a one-time, 2-week experience with no long-term sequela, I humbly suggest you think again. Look at what is going on in Camden County. Recall the fact land around the airport almost became a car-centric resort. This whole thing feels way more like a test of our collective tolerance for expansion of on-island industrial operations and not just thrusters.

With regard to “gel fuel” – here is what the NFPA says about it…. https://portal.ct.gov/CFPC/_old/CT-Fire-Academy/General-Information/NFPA-Urges-Extreme-Caution-When-Using-Gel-Fuel#:~:text=Pouring%20gel%20fuel%20in%20a,in%20a%20fire%20or%20injury.

A small aerospace company would be a nice addition to the city and county’s resume.
Judging from the diagram it’s quieter than John Travolta’s Jet. Bleachers should be set
up, what a great class trip that would make.