Each April, the City of Fernandina Beach invites those non-profit organizations seeking funding from the City to submit an application for consideration during the annual budget cycle.  The amount of money set aside in the City’s budget for these grants has ballooned over 8 years from roughly $10,000 to almost $200,000.  Last year the funding for social service agencies expanded even more when the Fernandina Beach City Commission (FBCC) approved massive increases to help provide covid relief for the neediest City residents.  They unanimously approved allocating an additional $210,000 to alleviate food shortages in the community last spring.  The source of the additional funding was FEMA reimbursement monies for preparatory actions and debris removal connected to Hurricane Irma. 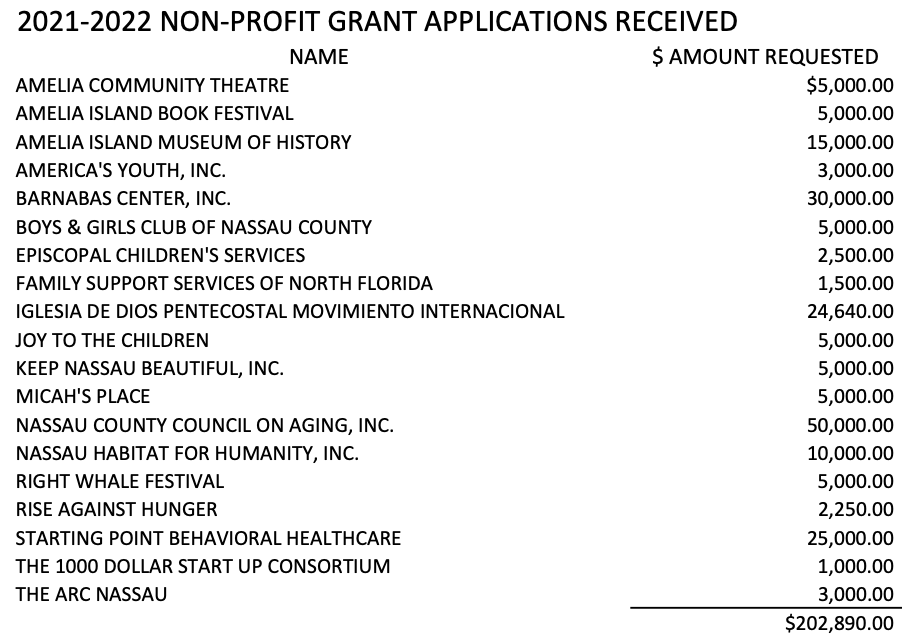 City Manager Dale Martin asked for guidance from Commissioners regarding the amount of money that should be plugged into the 2021-2022 Budget to address these requests.

Commissioner Bradley Bean suggested that the requests should be divided into two groups thereby separating out those organizations with which the City has a contractual arrangement to provide services.  He pointed out that the Amelia Island Museum of History and Keep Nassau Beautiful have been line items in previous budgets for the services they provide to the City.  He suggested that their funding should not be considered as “grant applications.”  Bean said that funding for the remaining grants should not be considered until the City’s revenue estimates for the next fiscal year have been firmed up and a specific amount of money be earmarked for non-profit grants.

Representatives of both the Amelia Island Museum of History and Keep Nassau Beautiful addressed the FBCC to justify their request for funding.  No other agency that requested funding appeared before the FBCC.

Other Commissioners agreed that those requests from organizations that provide services to the City should be separated from the remainder of organizations requesting grants.  On a 4-1 vote, Bean’s motion passed with Commissioner Chip Ross dissenting.  Ross later explained that he had opposed the motion because he believes that all organizations that receive City funding need to demonstrate “that they are providing a service that the City doesn’t provide, or needs to provide.”

Ross raised a need for non-profits to demonstrate accountability in spending any public money they receive.  He said that any grant application must include the benefits that would be provided to the public, not just members of their organization.  “We should avoid handing out money freely with no restrictions.” he said.  He noted a dramatic increase in the amount of funding allocated to these grants over recent years.

Vice Mayor Len Kreger agreed with separating out Keep Nassau Beautiful and the Amelia Island Museum of History from the other grant requests.  He said, “I’m concerned that we are picking winners and losers.  I’d like to see the remaining requests reviewed as to what the benefit is to the City and how the organization is performing.  I want to see how much money is being spent on salaries and how much is going into services.  Many organizations have such criteria.”  Kreger noted that there are some religious organizations requesting grants, which is also problematic.  He expressed his desire to see a total dollar amount proposed for non-profit grants and an established set of criteria for decision-making on funding grant requests.

City Manager Dale Martin said that it is incumbent on the FBCC as a policy making body to establish the criteria for funding grant requests.  “Given that there are differing pressures on the budget, City staff needs direction from you as the City Commission as to what number we put in the budget [for non-profit grant funding].”

Mayor Mike Lednovich reminded Commissioners that the City is slated to receive $5.5M in funding under the American Rescue Plan.  He suggested that part of that money could be used to fund non-profits, thereby freeing up money from the City’s General Operating Fund for other purposes.

Bean suggested that funding the grant requests for all except the Amelia Island Museum and Keep Nassau Beautiful should be delayed until there is more clarity in the amount of money the City will ultimately have to work with.  “I want to make sure [the City’s] financial needs are taken care of before we start distributing money,” he said.

Lednovich said, “At some time we are going to have to decide how much money to give to non-profits.  They are all worthy.”  Lednovich said he had consulted Charity Navigator, a service that rates charities based on their effectiveness in using the money they collect for the charity’s intended purpose.  Six of the non-profits seeking City grants were not rated because they had not turned in their financial reports.  “I’m not about to give money to an organization that does not provide its financials,” he said.

Sturges moved to include $100,000 in the new budget as a placeholder for funding non-profits, with the understanding that the amount could increase or decrease once final information on City revenues for FY 2021-22 is known.  Kreger seconded his motion.  Kreger clarified that this amount does not include Keep Nassau Beautiful or the Amelia Island Museum of History, which will be considered as budget line items.

Consideration of funding requests from non-profits has proven to be one of the thorniest issues Commissioners face during Budget preparation.

In preparing the 2013/14 Budget, Commissioners came close to eliminating all funding of nonprofit requests.  At that time some Commissioners strongly believed that the City should not be in the grant funding business.  Picking and choosing winners and losers for small amounts of financial aid was not appealing.  The prevailing philosophy was that the FBCC was dolling out the people’s money, when charity support should be done by the people themselves from their own pockets.

The last sentence states it all. FBCC should not be dolling out the people’s money, when charity support should be done by the people themselves from their own pockets. Nor should they be in the business of picking winners and losers, wheather religious or social groups. Come on guys, don’t be lazy when it comes spending. If you don’t personally give to the groups, why should I?