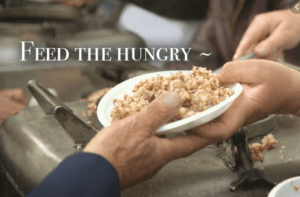 At the urging of Commissioner Chip Ross, the Fernandina Beach City Commission (FBCC) added consideration of providing financial assistance to help feed the City’s needy as an emergency action at the FBCC’s April 7, 2020 Regular Meeting.

Commissioner Ross moved approval and was seconded by Commissioner Mike Lednovich. The Emergency Resolution passed on a 5-0 vote following discussion.

There was a request that Nassau County provide additional funding as well. To date, the County has provided an additional $50,000 to the Council on Aging.

In introducing the Resolution, Ross emphasized that the numbers had not been “pulled out of the air.” He had talked with the heads of all three agencies and asked them about their anticipated needs over the next three months. “This is not perfect,” Ross said. “There are many other agencies that may need funding, and if they bring proposals forward, we should consider them.”

Ross acknowledged concerns raised by Vice Mayor Len Kreger about mental health needs but added, “Right now I am concerned that hungry people can eat. ,,, This is a beginning.”

Commissioner Phil Chapman explained that the money would be used to buy meals prepared in advance. “My wife and I have had the privilege of delivering some of these meals,” he said and explained the process along with the sometimes tearful gratitude of recipients. “I thoroughly support this measure,” he said.

“I totally support this measure,” Commissioner Mike Lednovich said, “but I’d like to see the City address the issue of relief more globally. We know that we are going to have other non-profits come forward for resources to help people in need. We need some guidelines around this.”

Vice Mayor Len Kreger supported the motion, but wondered why Barnabas was not being funded equally with the Council on Aging. He stressed the need to provide resources for mental health issues. He agreed with Lednovich that policy and guidelines needed to be developed to handle future requests.

City Manager Dale Martin said that the funding would come from FEMA reimbursement monies for preparatory actions and debris removal connected to Hurricane Irma. That storm had no impact on the marina, so it is not tied to marina improvements or repairs.

Lednovich said that “every penny counts” in providing this relief. He called for defining the total pot of money available for relief efforts going forward, along with policies and procedures for expending the funds.