OHPA: A work in progress — and transition

The Nassau County Ocean Highway and Port Authority (OHPA) held its monthly meeting on March 14, 2018 at the Page Governmental Center in Yulee, FL. The topic dominating most of the business of the meeting was transitioning Port of Fernandina operations from Kinder Morgan to Worldwide Terminals Fernandina, LLC.

Commissioners also discussed next steps in considering a request from the city of Fernandina Beach to support a move of the federal navigation channel in the Amelia River to accommodate expansion of the city marina.

Christopher Ragucci, President and CEO of Worldwide Terminals Fernandina, LLC (WWT), was not present. But Nickolas Ratti, WWT’s Chief Financial Officer, represented the firm, which has recently taken over responsibility for Nassau Terminals from Kinder Morgan. Ratti said that WWT has not furloughed Nassau Terminals’ highest paid employees, in response to a question from Commissioner Sturgess. He said that the port has always used temporary workers when workloads have exceeded normal levels.

Much of the commissioners’ discussion centered on a variety of challenges that will confront OHPA in the wake of transitioning to a new port operator. Consensus was that there would be a significantly increased workload for Board Attorney Clyde Davis, Treasurer Pierre LaPorte and Administrative Office Manager Joanna Cason. OHPA agreed to conduct a workshop at 6:00 p.m. on March 26 to discuss new salaries for these individuals as well as the increased workload for Laura DiBella, who has been serving as Port Director on a volunteer basis.

Attorney Davis said, “We need to learn how to run [OHPA] like a business.”

Davis and LaPorte reported that the OHPA bond debt has been discharged under the agreement to switch port operators from Kinder Morgan to WWT. However, according to Davis, the lien has not yet been lifted. That should occur within 30 days of the agreement. LaPorte said that the draft audit report would be received soon. He suggested that at the next meeting commissioners draw up a new budget for the remainder of the year that reflects the discharge of the bond. LaPorte advised that with the recent changes OHPA will be dealing with four different budgets: operations, maintenance, security and OHPA administration.

He also suggested that because there will be more money available to OHPA without the bond obligations, OHPA should develop an internal control system for handling funds.

OHPA Commissioners considered requests for payment for services submitted by Davis, LaPorte and Cason. The only claim that generated any discussion was submitted by Clyde Davis in the amount of $37,187.50 for professional services performed from October 2017 through February 2018. Commissioner Robert Sturgess (District 1) recommended reducing the amount. Sturgess expressed his dissatisfaction with Davis’ communications with commissioners over the change in port operators and debt defeasance.

Sturgess said that at the previous meeting Davis indicated he would be willing to discuss his fee. However, he did not appear willing to do so at the current time. When the vote was taken to pay Davis, only Sturgess voted in opposition to paying the amount billed. 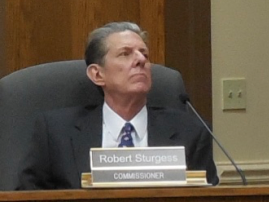 In voting to pay Davis’ bill as submitted, Commissioner Danny Fullwood noted that Davis has “worked hard to keep us afloat.” He said that OHPA would have had trouble finding an attorney to work for what Davis has been paid over the years. “He has been patient,” Fullwood said of Davis. “Commissioners could not have done the work he has done.” Sturgess said that while he has generally agreed with Fullwood’s positions on matters before the board, he disagreed with “about half” of what Fullwood said in this instance.

Moving the federal navigation channel in the Amelia River

OHPA Commissioners briefly discussed the previous night’s workshop with the Fernandina Beach City Commission during which the city asked OHPA as the port sponsor to support their request to the Army Corps of Engineers (ACE) to move the federal navigation channel 100 feet westward to allow for northward marina expansion.

Chair Salzburg indicated that he would invite ATM representative Rob Semmes to the April OHPA meeting for additional information and questions on options for relocating or abandoning the unused channel. He noted that Commissioner Fullwood had not been able to attend the joint meeting with the city and that Commissioner Sturgess had not been present for the entire briefing. He expressed optimism that OHPA would have a decision for the city following that meeting.

Much talk about “financing” – and leveraging. Any discussion, at all, about what the Port Authority actually plans to do with the port?