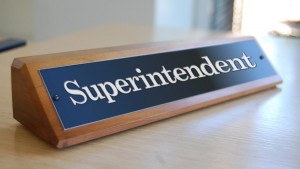 Now that the 2016 race for Superintendent of Nassau County Schools has all but been put away, this might be a good time to look at a question that several readers have raised over the election cycle: why is our local school superintendent elected and not appointed by the School Board? Especially since less than one percent of school systems nationwide have elected superintendents.

Of the ten highest ranked school systems in Florida, five are administered by appointed school superintendents and four elect their superintendents. The top ranked school—P.K. Yonge Developmental Research School—is an anomaly. Currently rated as A-, the school was designed as a special school district under Florida Department of Education funding and has been given the responsibility to develop innovative solutions to educational concerns in the state and to disseminate successful instructional programs to other school districts. P.K. Yonge educates 1,144 students through two schools covering Kindergarten through grade 12.

Nassau County ranked 8th, with a rating of B+. The district educates 11,155 students from Pre-K through 12th grade in 21 schools. According to state standards, 66% of students in this district are considered proficient in math and/or reading. The district has an annual budget of $94,792,000, spending an average of $8,528 per student. Nassau County elects its School Superintendent.

The only Northeast Florida school district to rank higher than Nassau County was St. Johns County, which ranked second in the state with a rating of A-. It has 33,583 students attending 49 schools in grades PK and K-12. According to state standards, 75% of students in this district are considered proficient in math and/or reading. The district has an annual budget of $292,268,000, spending an average of $9,255 per student. St. Johns County appoints its School Superintendent.

By comparison, the two lowest rated Florida school districts are Gadsden County and Jefferson County. Both of these counties elect their school superintendents.

Gadsden County (rated D and ranked second to last) has 6,012 students attending 24 schools in grades PK and K-12. According to state standards, 44% of students in this district are considered proficient in math and/or reading. The district has an annual budget of $60,840,000, spending an average of $9,856 per student.

Jefferson County, graded at D- and ranked last, has 963 students attending 7 schools in grades PK and K-12. According to state standards, 33% of students in this district are considered proficient in math and/or reading. The district has an annual budget of $11,889,000, spending an average of $11,554 per student.

The arguments for elected school superintendents

Proponents of elected superintendents tend to argue their support on three grounds: tradition, checks and balances vis-a-vis the school board, and cost savings. According to a recent report from WUFT http://www.wuft.org/news/2016/07/05/superintendents/

“ ‘The main benefit for elected superintendents is a level of independence from the school board,’ Thomas Valesky said. ‘This can be good or bad, but elected superintendents are more free to speak against policies they think do not benefit the district.’ ” Valesky is a professor of educational leadership at Florida Gulf Coast University.

Elected superintendents must meet county residency requirements, which is somewhat of a guarantee that the individual elected knows and understands the culture and values of the community. No professional background is required. Salaries for elected school superintendents are set by a state formula based upon the number of students in the district.

As a small county, Nassau County has been extremely fortunate in its current and future elected superintendents. Dr. John Ruis, who has served as Nassau County Superintendent since the 1990’s, came up through the ranks. He served as dean and instructor at Hilliard Junior-Senior High School and Principal of West Nassau High School before running for election as School Superintendent. Dr. Kathy Burns, who won the Republican Primary against local politician Janet Adkins, has experience both as an elected School Board Member/Board Chair and teacher. Dr. Burns has spent 20 years in the classroom, eight of which were in Nassau County, and was named Teacher of the Year in 1992, 2008, and 2014.

But what would happen to our schools and the quality of education if Nassau County could not produce candidates to run for School Superintendent with qualifications equal to those of Ruis and Burns? Would taxpayers and parents be satisfied with schools run by a successful candidate whose only technical qualifications are being 18 years old and a county resident?

Earlier referendum on the issue

The idea of changing from an elected to an appointed School Superintendent in Nassau County is not new. Following considerable community debate in the 1999-2000 timeframe, both the School Board and the Superintendent supported putting the question out to a vote as provided for in Florida Statutes: 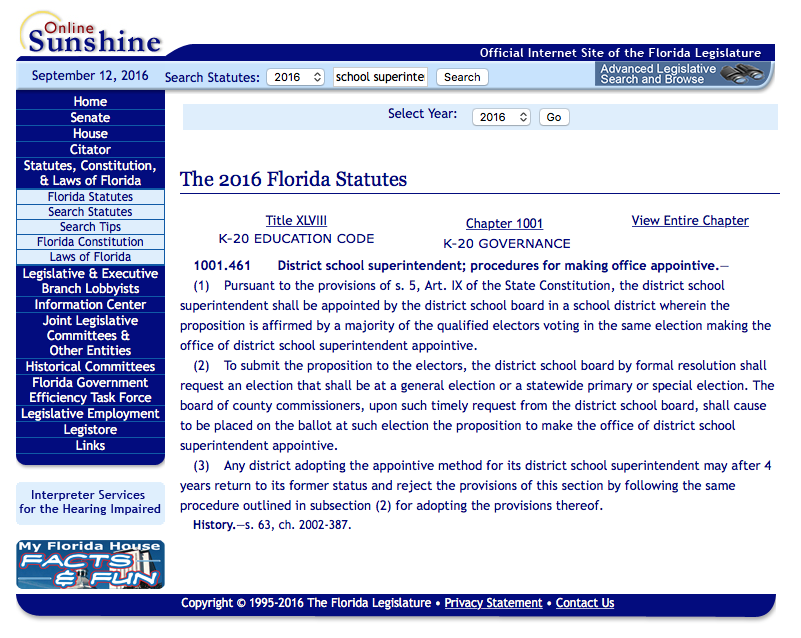 The measure made its way to the ballot in the November 2000 General Election: 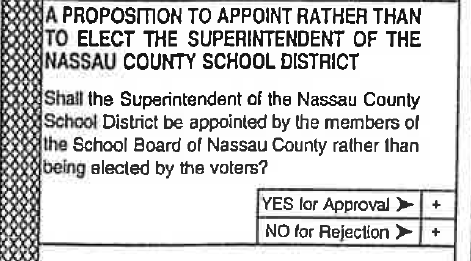 But the voters soundly defeated that referendum. With a 72.2 percent voter turnout in that election, the electorate rejected this proposition by a vote of 18,018 to 4,932.

The last attempt to change the method of School Superintendent selection failed for a variety of reasons. Some voters believed it was a move to get rid of Superintendent Ruis, which it was not. The incumbent would have been allowed to complete his term of office and be considered for appointment by the School Board. Some voters believed that their voting rights were being undermined by making the position an appointed one. But most critically, there was no person or group or political action committee educating the electorate on benefits that such a change could bring to the schools and county students. Without a clear understanding of the issue, the safest course of action for county voters was to just say no. And they did — in capital letters.

Times and circumstances change, however. Many Nassau County voters have expressed distaste—if not downright disgust—with the 2016 School Superintendent campaign, deploring the tone, focus and dark money that detracted from what should have been a debate over which candidate had the best plan for improving our already successful schools and providing world class educations to all our students.

Any campaign to change the status quo must take its time to educate the voters outside the heat of partisan elections. It may take several years to bring the issue back for another vote. But without the investment of time and money to promote the benefits of an appointed School Superintendent, any future referendum will share the same fate as the 2000 referendum.

There is another approach to improve the system, should voters prefer to stay with the elected superintendent: add more requirements to the candidate qualification process. For example, in Mississippi, candidates for School Superintendent must possess at a minimum an administrator’s license, known as a double A (AA) or a Masters degree in Educational Leadership. To add qualifications would involve legislative action.

If local voters desire to pursue non-partisan elections for constitutional officers or change other aspects of the school superintendent’s relationship to the school board, then citizens must be willing to pursue charter government for Nassau County. To date, while many have talked about such an effort, no person or group has taken that task in hand.

Readers interested in what charter government entails, may search the Fernandina Observer website for a series of articles that appeared earlier on that topic.

Suanne, thank you for this well researched and insightful article. And I agree our experience during the past primary may have changed many people’s attitudes about the current system of picking a superintendent. I always told my students, the best time to start looking for a new job is when you did not need one. Now that we have a new superintendent in place is the time to re-examine the selection process, not when we approach the next election.

I was somewhat taken back by concerns about the relationship between the school board and the superintendent. Every public company and non-profit works on the assumption it is the board’s responsibility to select the chief executive officer. If school board members had that additional responsibility, hopefully voters would show increased interest in board races. It is also consistent with our representative form of governance versus a pure democracy in which the voters directly decide every issue.

Suanne – you need to take a closer look at the real data and start to examine what is happening in our schools. For instance, the average number of public school students who attend college in Florida is 52%, here in Nassau County it is 42%. Maybe you should try to explain this? Also maybe a closer look at how the school system is “gaming” the graduation points earned towards the school grades and whether that resulted in state A plus money being awarded improperly should be a question added to your research.

Doug…At least you are consistent. You and your wife ran a disgusting campaign. And in the same disgusting manner are showing you are a sore, sore loser. Maybe you should check your calendar. The primary was over three weeks ago. Bye!!!!

Jay – Did you have any issue with the negative attacks on Janet via social media or is your view simply one sided? We live here, our children attend school here and have we have fought for funding for these schools and this community for many years. I think it is fair to say we have an interest in what happens. You can look the other way and dismiss the issue, does not make it go away. Let’s hope that someone starts to pay attention, we all will be affected. Have a good night!

Suanne, Thanks for your insightful article, as Jay said, Now is the proper time to have this Conversation about how Nassau County selects our Superintendent of Schools, as many have stated during this Election Cycle. Electing a local unqualfied person to manage our School System is archaic. To even allow a person with no experience in the field of education, as in the case of this Libertarian Candidate is Bizarre. The only requirement in Nassau County to run for this office, is #1 Be a Resident in Nassau County, and #2 Be a Registered Voter. Prehaps that worked in the first half of the 19th century, when we had a Doz. One room School Houses scattered throughout the County. I can see why Political folks like Mr. Adkins, wants to keep the Status Quo, It’s Power, Has nothing to do with giving our Children a better Education. Let’s have this conversation and join the Majority of the other Counties in Florida, and the Preponderance of the other States in our Union, and select the Best Candidate available for the Job, Utilizing our School Board. Get Politics and Religion out of the School Yard, as much as possible. BTW I’m proud that our electorate saw through the Negative Campaign Ads. by electing the most qualified person Nassau County had to choose from. I think Dr. Burns would have been on the “Short List” of any County, in any State, who was in the market for a Superintendent of Schools. We are fortunate.