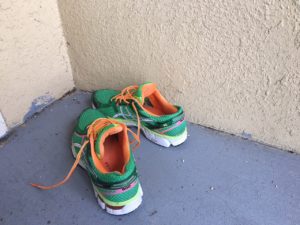 I have a pair of close running friends that are nearly gone. They’ve been with me for nearly two years through 5K, half-marathons, and training runs. On every run, they’ve hugged me like lifelong friends. They’ve wept as competitors passed me, encouraged faster turnover, and celebrated as teammates when medals were draped over my shoulders. I could have never finished any event without their support.

Everyone they met agreed that they were flashy, showy, standouts in a crowd. They brought cheerful comments as we lined-up at the beginning of a race, slog our way through the middle miles, and enjoyed post-race watermelon. They’ve had panache, style and personality. They’re fashion and devotion was unmatched. But, like all of us, age has dissipated their significance. Sounds harsh, but it’s true.

And, their retirement plan is unfortunately, short and bleak.

I’ve tried everything to keep them significant…treating them like an elderly parent, sick child or spouse. I wanted their youth renewed. But honestly, they’ve developed exterior abrasions and that distinct old smell. No matter the airing, sprays, and inserts, their aroma and crippled undercarriage continues to dissipate. I can no longer let them accompany me in public. They are an embarrassment. Their scars can no longer be disguised. No matter the amount of sun, breeze, and prayer, youth is not returning.

When the grim reaper swipes his sickle over your favorite pair of running shoes, it’s bitter.

It’s like your turn-up-the-radio rock star looking like the 70-year-old he is, but still trying to gyrate as he strums a lead guitar. Please, give me glory days again. Crown me king of the universe, and athletes are never able to get older than 38, rock stars stop aging at 60, and our stylish running shoes glow in the dark forever.

My Asics size 11 fish-green with orange highlights and bright orange and yellow shoelaces started dying about nine months ago. Once my race day best, then downgraded to general training companions, they had been demoted to running on the beach, during rainstorms, or when deep puddles were abundant. My love has not diminished for Fish Green, but it is an age thing…like the former all-pro NFL linebacker who now just can’t keep up with the young, speedy receivers.

With so many beach slews, rain runs, sockless sprints, Fish Green is now more of a dead fish than a hammerhead stalker. There are not enough Airwicks, Bounce sheets, or coffee beans to squelch his increasingly carcass odor. I gave a last ditch effort today by putting him in the washer, all by himself, with extra Lavender Spice Gain. It didn’t help.

I will give Fishy one more jog on the beach sometime soon (by myself), untie his laces for the last time, deposit in an ocean-side garbage can, and say a “racers ready, set, go,” prayer for his last hurrah. 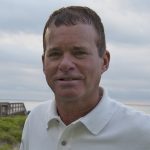 William (Bill) Pennington is a former sports columnist for the Savannah Morning News and Florida Times-Union. He was honored as Writer-of-the-Year for the Road Runners Clubs of America as well as a Associated Press award winner and Georgia Sportswriter columnist winner. He is a contributing writer for the News-Leader. We thank Bill for his contribution to the Fernandina Observer.