On behalf of the City of Fernandina Beach at the July 7, 2020 City Commission meeting, Mayor John Miller presented two proclamations recognizing efforts of local men and women to support military veterans and inviting other citizens to join them in helping to combat the high rate of suicide among veterans and helping veterans deal with many challenges they face following their military service.

The annual Challenge has more than thirty teams participating from around the world and will span more than 3,000 nautical miles from the Canary Islands to Antigua. The race brings together people from across the globe in an atmosphere electric with excitement as they help each other prepare for the challenge of crossing the Atlantic Ocean

Driven by a strong desire to aid and support their fellow Veterans, the Foar From Home team from Fernandina Beach is working to raise awareness and donations to combat the high rate of Veteran suicide in the United States and for Veteran post-traumatic stress disorder medical research.

Mayor Miller acknowledged the enthusuasm and eagerness of the team to begin the Talisker Whisky Atlantic Challenge and commended them for their determination to ensure their campaign represents all of Fernandina Beach, Amelia Island and Nassau County with integrity, strength of character, stewardship, purpose and pride. 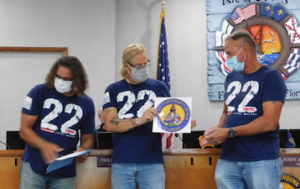 In addition to presenting the team with a proclamation, Mayor Miller also presented them with City Seal decals to be placed on their boat. He wished them a successful campaign on what will surely be an unforgettable and truly unique experience encouraged all citizens to take an active role in the prevention of Veteran suicide and to donate towards Veteran post-traumatic stress disorder medical research.

In accepting the proclamation and speaking for the team, Paul Lore explained that the number 22 on their jerseys represented the number of veterans nationwide who on the average commit suicide every day. Over 6,000 active military and veterans have been lost to suicide since 2007.

The Cross the Line Foundation is a not-for-profit organization which harnesses the therapeutic power of our majestic ocean waters to support Military Veterans across all branches of the United States Armed Forces by raising awareness for a variety of Veteran related post- traumatic stress disorders. They partner with other Veteran organizations to ensure our Nation’s warriors receive assistance with cognitive counseling, housing, employment, healthcare, mental health resources, suicide prevention, post-traumatic stress disorder and much more.

This year, the Cross the Line Foundation sponsored the 2nd Annual Paddle for Veterans which took place June 20, 2020. Eighty-eight patriotic participants forged through 7.29 nautical miles from the St. Marys, Georgia waterfront to the downtown Fernandina Beach waterfront. The money raised by the 2020 Paddle for Veterans event was allocated directly to a local agency: K9s For Warriors, the Nation’s largest provider of service dogs to military veterans. K9s For Warriors rescues and trains shelter dogs to assist Veterans suffering from post-traumatic stress disorder, traumatic brain injury and/or military sexual trauma. K9s For Warriors is working to end veteran suicide and return our Warriors to a life of dignity and independence.

Mayor Miller commended the Cross the Line Foundation Paddle for Veterans event participants, organizers, volunteers and donors for their “unmatched and tireless commitment” to offering direct links to resources which assist Veterans with their reintegration from service, while continuing to raise awareness related to issues affecting those who served. 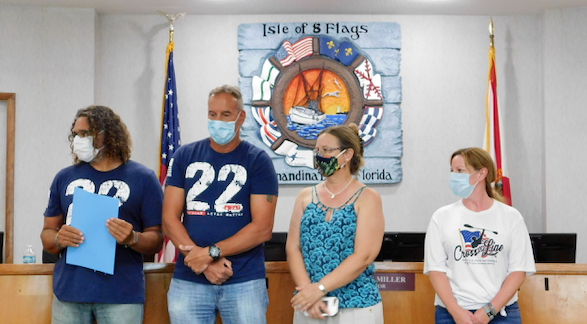 Speaking on behalf of the organization, Bill Cimino said that in just over 2 years they have obtained their status as a non profit organization and raised more than $20,000 in the cause of preventing Veteran suicides. He expressed the Foundation’s pride and honor to be associated with the City of Fernandina Beach.

Cimino and Lore, founders of the organzation, were joined by other members of the Board in accepting the proclamation.