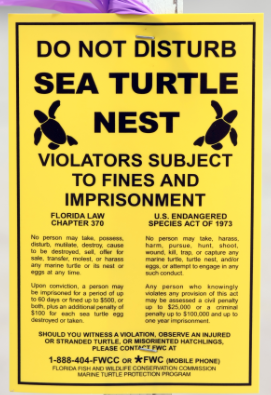 The Florida Fish and Wildlife Conservation Commission (FWC) reminds the public that we can help sea turtles have a successful nesting season by giving them space, removing beach furniture at night, keeping beaches clean and dark, and never disturbing their nests. Sea turtles and their nests are protected under state and federal law.

Getting too close (50 feet or less) to nesting sea turtles can cause them to leave the beach before they complete nesting. All species of sea turtles and their nests are protected and should not be disturbed — it is illegal to harm, harass or take nesting sea turtles, their eggs or hatchlings. If you see someone disturbing a sea turtle nest, or see an injured, dead or harassed sea turtle, report it to the FWC’s Wildlife Alert hotline at 888-404-FWCC (3922). Cell phone users can also call *FWC or #FWC or send a text to Tip@MyFWC.com.

In addition to giving space to sea turtles and their nests, beachgoers can help with sea turtle nesting success every time they visit the shore:

For more information about nesting sea turtles and how you can help, visit MyFWC.com/SeaTurtleor see the FWC’s “Be a Beach Hero” brochure. You can also help sea turtles by reporting anyone disturbing a sea turtle or nest, as well as sea turtles that are sick, injured, entangled or dead to the FWC’s Wildlife Alert Hotline at 888-404-FWCC (3922).