Skip to content
FERNANDINA BEACH WEATHER
Nature Things to do

Researchers with the Florida Fish and Wildlife Conservation Commission (FWC) and the National Oceanic and Atmospheric Administration are looking for anglers’ help to capture information about the Atlantic red snapper fishery. The 2021 recreational seasonin Atlantic federal waters is July 9-11. Anglers are limited to one fish per person, per day, with no minimum size limit in federal waters. Best fishing practices should be used and anglers can learn about helping deep water fish survive upon release at MyFWC.com/FishHandling. 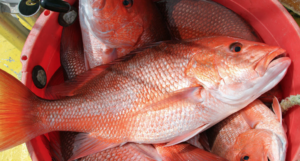 FWC researchers will be out along Florida’s east coast during each day of the season asking recreational fishers about their red snapper trips, the number of red snapper harvested, and for permission to measure and weigh harvested fish and collect biological samples. This will not affect fish fillets and will help determine the size and age distribution of the red snapper population. New this year, biologists will also ask permission to take a small piece of fin tissue from harvested fish for a large-scale genetics study to help estimate the total number of red snapper in the Atlantic population.

In addition to special surveys conducted during the red snapper season, Florida’s State Reef Fish Survey is also being conducted year-round. This survey will collect data directly from recreational anglers and spear fishers with the State Reef Fish Angler designation, which is required to harvest certain reef fish species, including red snapper, anywhere in Florida. The two surveys will work closely together to track red snapper landings in season and improve year-round estimates of recreational catch, including releases, for a variety of important reef fish stocks, such as red snapper in the south Atlantic. Learn more about the science behind the surveys and how to obtain the State Reef Fish Angler designation at MyFWC.com/SRFS.

Anglers are also encouraged to submit their catch information to the South Atlantic Fishery Management Council online at MyFishCount.com, even if information has already been submitted to FWC staff in person.

For information on snapper rules and regulations, visit MyFWC.com/Marine and click on “Snappers” under the “Reef Fish” tab or download the FishRules app on your smart device.