At the June 17, 2014 regular meeting of the Fernandina Beach City Commission (FBCC) once again, Lynn Williams, waterfront activist and Florida Inland Navigation District (FIND) member, addressed his proposed water injection dredging (WID) experiment.  But before he could begin his presentation, Commissioner Pat Gass took the floor with an apology to Williams.  She said, “Mr. Williams, I’d like to publicly apologize to you for the last meeting and not defending you.   You have done nothing wrong, and I’m sorry I didn’t come to your support.  We the Commission owe you thanks and gratitude.  You have kept us informed every step of the way .  You have done everything we’ve asked you to do. Thank you.  I apologize for not coming to your aid two weeks ago when you were called out and called down.  It was embarrassing.  It was humiliating, and I apologize for my lack of response, but I was just dumbfounded.  I offer you my most sincere apology.”  This was in reference to Mayor Boner’s questioning Williams at the June 3, 2014 meeting regarding Williams’ accounting for the $8,000 of public money he had been granted over a year ago to conduct his experiment.

Williams, who seemed surprised by the apology, countered with one of his own.  He said, “Commissioners, and particularly Mayor Boner, I apologize for my difficult behavior two weeks ago.  It was brusque, abrupt, and some might say, hostile. If there is an excuse for that it is only that this project has been difficult and discouraging, sometime disappointing, sometime enlightening, and I was not in a very good frame of mind.  I thought Mayor Boner would offer help and suggestions, [but when he began asking me about accounting] I had too thin a skin that night. I took his questions as a personal attack, and I shouldn’t have.  I have not kept careful records, but calculate based on recollection over the past few days that I have spent about $3,380 on a pump, piping, valves, a pressure gauge, and other hardware. Part is also for travel expenses to Jacksonville and Tallahassee.” ”  He cited media criticism directed at the FBCC for careless management of public money, which he opined, “must be hurtful.”   He credited Applied Technology and Management, Inc. (ATM)  and Westrec for their support, without which the project could not be as far along as it is.  He also credited FIND for lobbying the Florida Department of Environmental Protection (FDEP) to help them understand that existing rules regarding dredging in the state address situations in other parts of the state, but not the existing situation in the Fernandina Beach marina basin.

Williams added that effective Wednesday, the Corps of Engineers was “on board” and had issued a special joint permit with FDEP to allow Williams to proceed with the test. Williams reported that he had been in touch with the company which has agreed to send him operating parameters for WID projects.  With that, Williams played  a 6-minute video prepared by the Van Oord Company, a Dutch contracting company that specializes in dredging and land reclamation, which he said would show how effective this process could be when properly applied.

Commissioner Charlie Corbett thanked Williams for the presentation, adding that shrimp boats and pogey boats used to do the same thing in stirring up the silt with their motors before the practice was banned in Florida.  Williams added that this process has not been banned in Georgia, and that if the city were operating under Georgia law, there would be no need to move forward with the experiment.

Mayor Boner asked if Van Oord had a minimal size for a WID platform.  Williams replied that the smallest they have is 78 feet by 33 feet, which is too large for the city marina.  He said the company charges a $150-175K mobilization charge.  “Our job is so small compared to the things they do, it is unlikely that they would be interested.  I don’t think they would build the equipment,” he said.  “But they are a very friendly bunch.”

Williams speculated that in retrospect, it would have been a better idea to concentrate on changing the FDEP rule as opposed to mounting an experiment.  He said that Kings Bay and places in Georgia use blower systems that do something similar to what he is proposing.

Mayor Boner said that one of the problems in dealing with Williams and the WID experiment has been that there was never a collectively expressed expectation, but rather, “Every commissioner expected something different.  I tend to expect a line of expenses and receipts showing where the money went, and not all commissioners expected that.  I hope you are successful, and we look forward to the next update.”

Williams resumed his seat amid applause from his supporters.

Mayor Boner recognized Betsie Huben, a member of the audience who brought two questions on WID to the FBCC and Williams.  She asked, “What are the benchmark criteria for judging success of the experiment?  Will the unspent portion of the original $8,000 be enough to get [Williams} to his goal?”

Williams replied that the money is sufficient, that he never started out thinking it was about money.  He said, “I think there is enough to see if the experiment will pass the turbidity test.”  With respect to measures of success, Williams referenced a scientific measure of turbidity that would be measured with instruments provided by ATM.

Huben followed up with another question, “If the test is successful, where do we go from there?”  Williams resonded that ATM was optimistic on passing the turbidity test, but he felt the odds were 50-50.  He said that if the turbidity test passed, it would cost $50-80K to build a production machine that would continually dredge the marina.  He expressed confidence that the city would be able to secure a FIND grant for $40K of that amount. 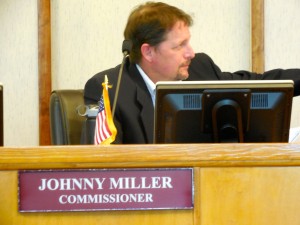 Commissioner Johnny MIller asked, “Who’s paying ATM [for their assistance and equipment]?  Williams responded that they are glad to help out.  He said that bureaucrats have little use for dealing with individual citizens on local issues, but that ATM would help out for no charge.

Coleman Langshaw, former city marina director, rose in support of Williams.  He said that placement of the measures for the turbidity test was arbitrary and results were subject to weather and tides.  He said that $80K was a “drop in the bucket” compared to current dredging costs.  He said that WID would be a “complete game changer” for the marina’s viability and that the FBCC needed to be ready to put more money up front to ensure that the the process can be approved and implemented.

Good to see that things are back on track. I have always known Lynn to be an honest and straightforward fellow and I was surprised by his comments at the earlier meeting. We all have our “not so good” days and that was evidently one of Lynn’s. In dealing with the bureaucracies of the COE and FDEP I can see how that can easily happen to someone. I hope the turbidity test is successful and a working WID can be produced as it would be a financial lifesaver for the FB marina and its ongoing dredging requirements.

This method of dredging should be approved, the silt that builds up at the Fernandina Harbor Marina is a naturally occurring substance in the environment, its called detritus, detritus is FOOD for all of the sea creatures that live in our estuary. Come along on the Amelia River Cruises, Shrimping/Eco Tour and learn all about just how important detritus is for our local environment from our Marine Biologist Miss Justina Dacey. Please come before the silt builds up so much that we can’t get out of our slip!

Why wouldn’t someone question the latest details and financial details up to this point?

The tall curbs on the east side of Front Street were r...
wpDiscuz
3
0
Would love your thoughts, please comment.x
()
x
| Reply
Comment Author Info