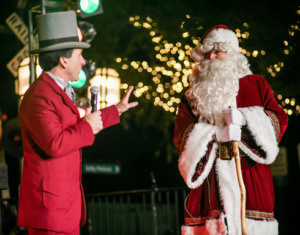 AMELIA ISLAND, Fla. (Dec. 26, 2019) – Despite a rainy start to the event, research released by the Amelia Island Convention & Visitors Bureau (CVB) shows the fifth annual Dickens on Centre supported an estimated economic impact of more than $3.5 million from off-island visitors (overnight guests and day-trippers). Local residents spent an additional estimated $250,000 with merchants and vendors related to the weekend’s festivities. One of Amelia Island’s signature annual events, the award-winning Dickens on Centre is free to the public and was held Dec. 13-15 in downtown Fernandina Beach.

“The research conducted each year shows steady growth in the economic benefit of the Dickens on Centre event, having grown from $2.7 million in 2017 to now more than $3.5 million,” said Gil Langley, president and CEO of the Amelia Island CVB. “Events like Dickens are a consistent draw for visitors and a key component of our marketing strategy to support the industry during shoulder seasons.”

The CVB promotes the annual Dickens on Centre, now in its fifth year, as the centerpiece of the island’s many holiday events, including the Holiday Home Tour and monthlong events at the Omni Amelia Island Plantation and The Ritz-Carlton Amelia Island.

Among the other key research findings was an “excellent” overall experience rating of 98.2 percent from off-island visitors and nearly 100 percent (99%) from island residents.

“The continued success of the Dickens event is due to ongoing community support and a tremendous amount of coordination and cooperation between CVB staff, volunteers, industry partners and local government,” stated Langley. “The economic impact numbers are most important, but it is also gratifying to know our local community is happy with the event.”

The Amelia Island CVB’s Dickens on Centre event has been honored with multiple marketing awards, including a Henry Award at the VISIT FLORIDA Flagler Awards, and a Silver Award at the HSMAI Adrian Awards.