During the June 24, 2014 Fernandina Beach City Commission (FBCC) Budget Workshop, Utilities Department Director John Mandrick updated commissioners on next year’s budget projections for Utilities Department enterprise funds:  water, wastewater and stormwater. He said that the bulk of the water purchased in the city is spread on lawns.  As a result revenues from the water fund can fluctuate as much as a million dollars, depending on weather conditions for the year.   He said, “Litigation costs are eating up reserves,”—a reference to the on-going impact fee law suits.

Mandrick plans to continue the renewal/replacement project next year, which includes relining old pipes and replacing old water meters.  He said that older meters read slow, and that the life of a water meter is considered to be 10 years, but the city pushes that to 15.  Even so, unlike a city like Atlanta, which loses 30 percent of its water revenue due to failure to track usage, Fernandina Beach loses only about one percent.

He added that his wastewater department continues to move toward solar energy as an alternative to electricity to avoid costly increases when Florida Public Utilities raises rates.  Currently, solar is saving about $150 per month.  This does not seem like much, Mandrick acknowledged, when talking about a monthly electric bill of $10-12,000.  But he believes the city is moving in the right direction.  His goal is to use solar to provide for 10 percent of his operation’s energy use.

Mandrick emphasized that profitability of his operation is hampered by the $2M debt incurred to purchase the water facility several years ago from Florida Public Utilities.  He also emphasized that each year he turns over significant revenues—about $420K– to the city’s general fund.  Rates rise by 3 percent per year to avert more significant, one-time increases.

City Manager Gerrity asked Mandrick to address the water and sewer situation in the Front Street/Downtown area.  Mandrick said that at high tide, backwash into the sewer system often brings stormwater to within 1-2” of overflowing the street level grates.  He added that water and sewer are available along Front Street, but that some who build might need to install their own grinder systems to hook into the wastewater system. 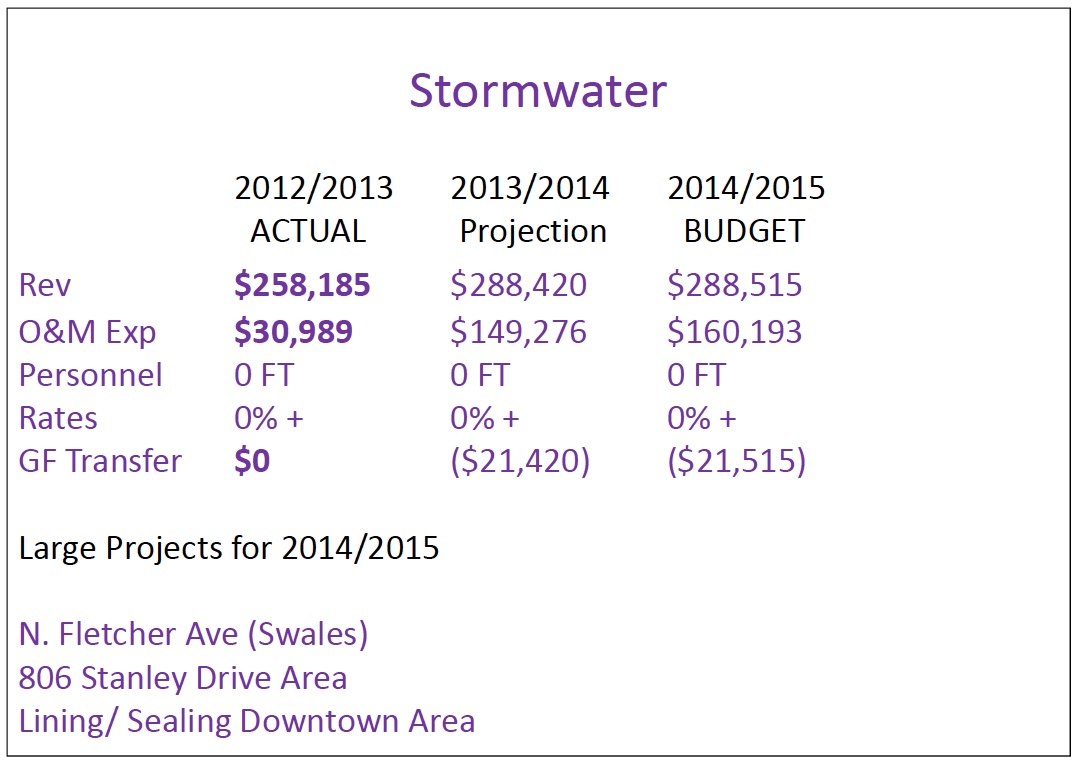 Mayor Ed Boner asked if there is sufficient funding in the Stormwater Management Fund.  Mandrick said that it will take $17M to complete all the projects identified, and that the city is taking small steps, as funds are available, to fix problems.  Projects scheduled for next year include building swales on North Fletcher Avenue; lining and sealing pipes in the downtown area; and the 806 Stanley Road area.

Mandrick explained that the swales along North Fletcher are underway.  They are basically ditches alongside of the road.  He cited attempts to work with Fort Clinch to utilize an old mosquito ditch to help in mitigating the stormwater runoff in the north beach area.  But in a June 4 letter, the State Division of Recreation and Parks responded to the city’s request for an easement through the park saying, “… we cannot approve the proposed easement because of the extensive environmental and aesthetic damage the proposed project would cause to the park.”  They did add that they would be willing “to consider alternatives that minimize impact to the park to the greatest extent feasible.”  They went on to list seven main concerns,  some of which included possible intrusion of saltwater, contamination of stormwater and impact on gopher tortoises. Addressing all conditions to the satisfaction of the state seemed highly unlikely under current budget conditions.