Did you know that there are about 300 dolphins that live in the St. John’s River between the ocean and downtown Jacksonville? Of these 300, about 145 are permanent residents and the others are presumably snowbirds – or snow dolphins. My newfound knowledge comes from listening to Dr. Quincy Gibson at this week’s Wild Amelia lecture series. Dr. Gibson is the lead scientist in the University of North Florida’s Marine Mammal Research Program, part of the university’s Coastal Biology Flagship Program.

Dr. Gibson stressed that the dolphins and their lives have strong similarities to humans. Physiologically, the dolphin brain is large in relationship to their body size, second only to humans. Dolphins live easily 40 years with some recorded at 60 years. They nurse their young for 2 to 5 years and in one case, for nearly 10 years. Socially, Dolphin behavior is complex and similar to humans as well. Males tend to congregate together, separately from females. (Think of the last party you went to and you’ll see the similarity.)

The research program identifies and monitors dolphin populations in the river and conducts behavioral research. Dolphins are identified by their dorsal fins – size, shape, scarring. The dolphins’ habitat is potentially in danger because of the plans for significantly dredging and deepening the river to accommodate larger ships at the port. The dredging project also calls for dynamiting certain areas and re-directing some of the river flow. Dr. Gibson has been working with various government groups to mitigate the effects of river deepening project on the dolphins. The hope is that the project may be able to be implemented in a manner that will be easier on the dolphins.

Dr. Gibson appeared courtesy of Wild Amelia, who sponsors the Wild Nite Lecture Series on nature. These lectures run the second Tuesday of the month from September to May. Next month’s lecture will be “Sharks”, on May 9 at the Peck Center. The group also sponsors a Junior Naturalist program where children ages 7 to 14 can do nature activities including wildlife studies, art and photography, creative writing, and the like. The largest event is the Wild Amelia Festival, featuring an expo, eco tours, turtle releases, boat trips and other activities. This year it will be run May 20-22.

I knew of Wild Amelia through publicity for the Wild Amelia Festival but didn’t know about the lectures. Like many of you, I ended up at the lecture because I knew two people who belong to Wild Amelia. I invite you to look at the website – www.wildamelia.com and put the lecture or the festival on your list. 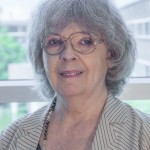 Evelyn McDonald moved to Fernandina Beach from the Maryland suburbs of Washington, D.C. in 2006. She is a chair of Arts & Culture Nassau, a city commission charged with support of the arts in Nassau County. She serves on FSCJ’s Curriculum Committee for the Center for Lifelong Learning. She is also the chair of the Dean’s Council for the Carpenter Library at the UNF. Ms. McDonald has MS in Technology Management from the University of Maryland’s University College and a BA in Spanish from the University of Michigan.