The Storytelling Sims talk about Florida during World War II

The Storytelling Simms – Wayne and Jane – told their tales of life during World War II on Florida’s First Coast to a local audience of about 80 people gathered at Peck High School’s auditorium Friday evening August 16, 2013, as part of the Amelia Island Museum of History’s Journey Stories program series and exhibit.  The Sims, who live in St. Augustine, belong to the National Storytelling Network, Florida Storytelling Association, Tale Tellers of Saint Augustine, and other organizations that promote storytelling as a means to help people understand the past.  They have been performing and weaving narratives for the education and entertainment of their audiences large and small since 1994.

In putting together their talk, they conducted extensive research in St. Augustine archives and interviewed people who remembered what it was like to live in Florida during World War II.  They identified key events that impacted the First Coast, such as U-Boat activity off the coast, the growth of Camp Blanding into Florida’s fourth largest city during the war, the role of the Coast Guard, and the landing of German saboteurs at Ponte Vedra Beach.  They interspersed these historical events with changes that affected ordinary people in going about their daily lives during wartime.

Most of their stories centered on the year 1942.  Jane Sims, who concentrated on home front stories and information gleaned from archives of the St. Augustine Record, told stories about rationing and shortages.  She spoke about black out requirements and how they affected night driving.  She also talked about efforts to support and entertain the troops that visited St. Augustine on weekends from Camp Blanding.  Wayne Sims, provided details on the German Operation Drumbeat, which was designed to disrupt the shipment of supplies from the Western Hemisphere to England by aggressive U-Boat patrols.  He highlighted the disaster of April 10, 1942, when U-Boat 123 torpedoed and sank the SS Gulf America off the coast of Jacksonville Beach, blowing up 90,000 barrels of oil on its way from Texas to New York.

The Sims’ touted the success of the citizens of St. Augustine in war bond drives.  In September 1942 citizens raised $87,875 in one day when Hollywood actress Veronica Lake headlined a bond tour, autographing bonds bought that day.  At another war bond auction, citizens raised $257,000.

While many of their daily life stories were based in St. Augustine, similar stories could be told involving life in Fernandina at that time.  Indeed, the Horse Marines patrolled beaches from Fernandina to St. Augustine, and many citizens volunteered to serve as plane spotters and block wardens throughout the First Coast. 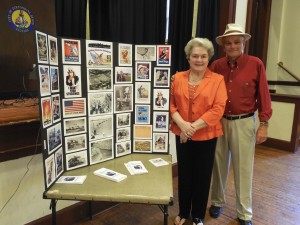 The Sims’ brought an exhibit representing both posters of the era and actual photos of wartime life in St. Augustine. The audience members were appreciative of their well-organized and entertaining style of narrative as well as their interesting exhibit.

Their talk was free and open to the public, having been supported by a grant from the Florida Humanities Council.