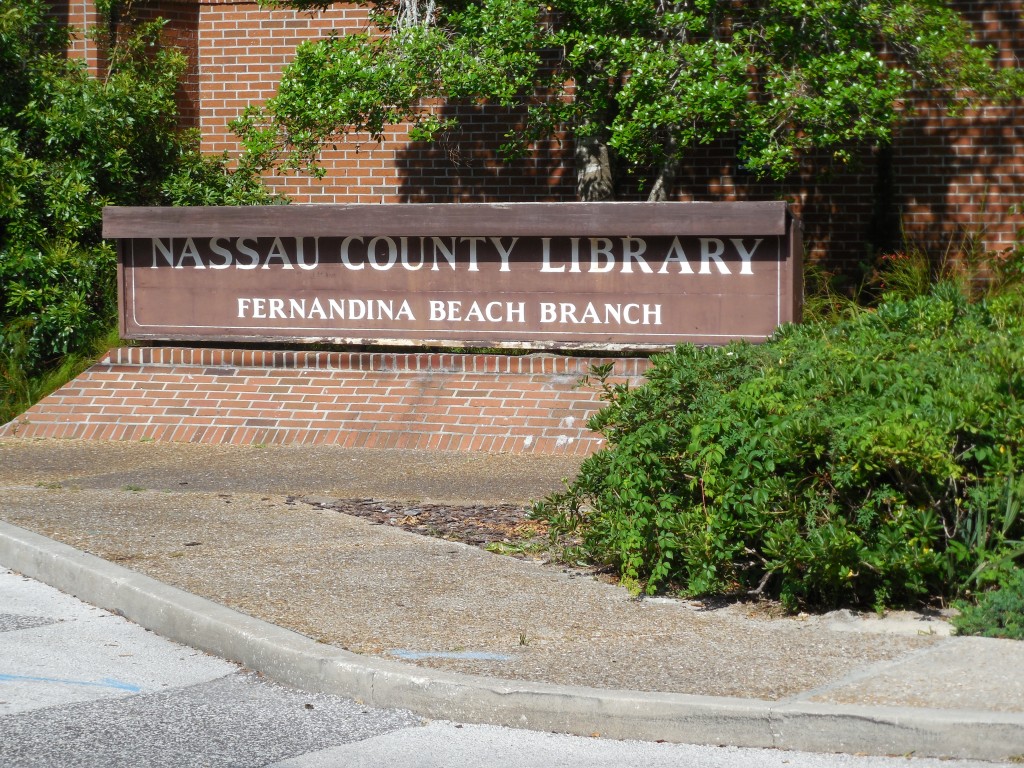 The Fernandina Beach City Commission (FBCC), which agreed to make its annual payment for library services to Nassau County on August 12, 2013, reversed itself on September 3, 2013 when faced with a resolution authorizing the budgeted payment of $51,000 … but then reversed itself once more and by the end of the meeting approved the item on a 4-0 vote.

During its August 12, 2013 budget workshop (Click here for previous Observer report) the Fernandina Beach City Commission (FBCC) appeared to have achieved consensus to pay its annual fee — $51,000 approved in the current city budget — to Nassau County in support of library operations for the current fiscal year.  During that meeting, Commissioner Pat Gass argued against paying an annual fee, claiming both that other county municipalities do not pay for this countywide service and that Nassau County neither needs nor expects the payment.  However she reversed course during that meeting saying, “We need to honor our commitment.  If we said we would pay them the money for this year, we are honor bound to take care of it.  We just aren’t going to do it again next year.”  With that, Mayor Sarah Pelican told City Manager Gerrity that he had consensus.  Gerrity then agreed to bring to a September meeting a resolution authorizing payment for the current fiscal year.

Yet to the puzzlement and consternation of many – including, it appeared, City Manager Joe Gerrity – two of the commissioners who had told him to bring back the authorizing resolution for a vote reversed themselves and voted against it during the September 3, 2013 FBCC meeting, roughly 3 weeks later, leaving only Commissioners Ed Boner and Arlene Filkoff to support the measure.  Since Vice Mayor Charlie Corbett was on vacation, he was not present to vote, although he had been present at the August 12 workshop.  This is the second consecutive year when Corbett has scheduled vacation time during the critical weeks leading up to passage of the budget for the next fiscal year.  With Gass and Pelican opposed, the measure failed on the 2-2 tie vote.

A flurry of activity and discussion followed during which Gerrity tried to understand the vote change.  The Interim City Clerk was instructed to research minutes of previous meetings to determine whether the FBCC had agreed to make library payment for the current fiscal year, which ends September 30, 2013.

Meanwhile Commissioner Arlene Filkoff took issue with Gerrity’s decision to set up a meeting involving only himself and Mayor Pelican to meet with the county on the future of library funding after he had been expressly instructed to set up a meeting between the full commissions of the city and the county to discuss the library, beach renourishment and island-wide fire rescue services.   Gerrity replied that indeed he had tried to schedule such a meeting, but had received word that the County Commission did not feel such a meeting was needed.  The Nassau County Commission had apparently authorized Chair Danny Leeper and County Manager Ted Selby to meet with Gerrity and Mayor Pelican in lieu of full boards meeting.

Gerrity’s explanation did not satisfy Filkoff, who appeared to receive confirmation from other city commissioners that they were expecting a joint meeting of the full boards as well.  He went on to say that large meetings between multiple elected officials do not tend to accomplish much, in his experience.  Filkoff asked Gerrity if he felt comfortable being able to represent the positions of all the city commissioners if the meeting would only be between himself and the county manager.  “Oh, heck no.  I wouldn’t even begin to,” Gerrity quickly replied. Pelican asked Gerrity if he would feel comfortable meeting just with Ted Selby, his counterpart.  Gerrity said he would need to think about that.

Filkoff said that if the proposed meeting with county representatives would continue as Gerrity described, she also wished to be included.  She said that Gerrity reports to a divided commission, and that the mayor could not represent her position any more than Filkoff could represent the mayor’s position.

Gerrity said that he didn’t want to get caught between the two sides, to which Filkoff replied under her breath, “Well, that’s not a surprise.”

Gerrity raised his voice as he reminded commissioners that bids have been received on the proposed library construction and that the prices won’t hold forever.  He expressed urgency in getting some buy-in from the county on the bid process to date.

Finally Mayor Pelican said, “How about if I pass the gavel down and make a motion.”  In the absence of Vice Mayor Corbett, Commissioner Filkoff accepted the gavel.  Pelican moved approval of Resolution 2013-95, which authorized the city’s library payment to the county for the current fiscal year, and provided for continuing discussions over the future of the interlocal agreement on library services to the city.  Commissioner Boner seconded the motion for discussion.

Commissioner Ed Boner reiterated his concern that in light of the library renovation project, this might not be the best time to schedule a joint meeting to talk about the city’s possible reversal on annual library operating payments.  Mayor Pelican said that during her discussions with county commissioners she has always been assured that the county’s commitment to the library expansion is firm.  She said that the possibility of the county’s backing off its financial commitment seems to be a straw man that is used to scare people who then march on city hall.

When Filkoff called the second vote on the earlier failed resolution with Pelican’s amended language calling for future discussions, it passed unanimously.

The discussion on this item carried through the entire meeting as minutes were found and read and questions over the future of the joint city county meeting on the library were asked and addressed.  By the end of the meeting, it appeared that the joint city-county meeting originally scheduled for Thursday September 5 to include Mayor Pelican and City Manager Gerrity as city representatives would stay on the calendar but involve only Gerrity and County Manager Ted Selby.

Following the meeting Commissioner Filkoff received word that the meeting as originally announced would proceed to include both Mayor Pelican and County Board Chair Danny Leeper.  When Filkoff announced that she, too, planned to attend that meeting, the meeting was cancelled.