In the early 1970’s I helped establish the Foundation and was elected its first President.  My late wife, Pat, and I both served on the Board of Directors of the Foundation for over 15 years and Pat was President for 3 years.

In 1990, on behalf of the Foundation, Pat and I went to Robinson Iron in Alexander City, Alabama to purchase the Crane fountain.  It is a replica of the fountain that once stood in front of the train depot on Centre Street

The Foundation and City agreed that the Foundation would purchase the fountain and the City would install and maintain it.

It is obvious that no one has maintained the fountain.  Babette, my wife of 20 years, and I left this area for a period of ten years, returning to the island two years ago.  We were appalled by the ragged appearance of the fountain.  This does not speak well for a city that prides itself on restoration.

Whereas, the mission of the Amelia Island Fernandina Restoration Foundation is to promote the preservation of the architectural, historical and archaeological heritage of Amelia Island and Fernandina Beach through advocacy and historic property protection and stewardship, I propose that the Foundation start a fund to solicit money from private contributions and from the City to restore of replace the fountain.  (It might be less expensive to replace the fountain with a replica than to restore it.)   If such a fund is started Babette and I pledge to contribute $1,000.000.

On September 9, 2011, historic preservation expert [Ed] McMahon stated during his presentation to the Foundation, “Public buildings should set the standard in a community.”  I am sure this would include the fountain in question.

Open letter to Mr. Aubrey Williams   regarding the Crane Fountain 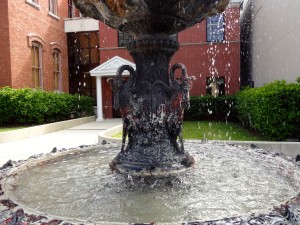 The Amelia Island Fernandina Restoration Foundation wishes to thank you for your concern regarding the condition of the Crane Fountain located in front of the Historic Nassau County Courthouse on Centre Street.  Your generous offer of $1,000 to spearhead the project demonstrates your continued commitment to our beautiful city and its effort to maintain our unique historic character. 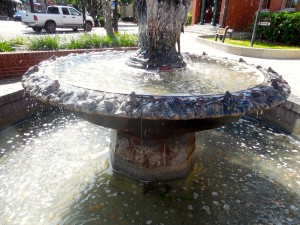 Mr. Williams, thank you again for bringing attention to the importance of local historic preservation. Public structures not only set standards for a community, but also create a sense of place and identity that is unique to each community.

For more information on the fountain and its history, readers are invited to read the article that follows.

I WILL Draw Community Attention To This Fountain !!!

I also wish someone would start a fund or encourage the city to restore & maintain the quaint and beautiful “triple” fountain in front of the train depot. I’ve read/heard great stories about how that fountain came to be, and the interesting things about why it has three basins. It’s old for sure, but not that long ago, it was working for drinking water (I can’t remember when they turned off the water). It would be a nice asset to the community & to visitors walking around downtown, plus would preserve a historic feature as well. I wonder how much it would cost to turn the water back on and/or fix any pipes inside. I’d donate to that fund!

Thank you Dr. Antun for being willing to run for office and ...
wpDiscuz
2
0
Would love your thoughts, please comment.x
()
x
| Reply
Comment Author Info