The cost of a Fernandina Beach election campaign: an opinion 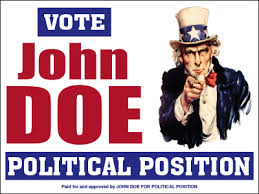 How much does it cost to run for the Fernandina Beach City Commission? This is one of the first questions folks ask as they consider dipping their toes into local political waters.

In the November 2014 General Election, Robin Lentz (2,979 votes) defeated incumbent commissioner Sarah Pelican (2,292 votes) in the race for the Group 3 seat. Because none of the three candidates contending for the Group 2 Seat received 50 percent plus one of the votes cast, the two top vote getters—incumbent commissioner Charlie Corbett and former commissioner Tim Poynter—faced each other in a runoff election. Candidate Roy Smith (649 votes) was eliminated in the General Election. Poynter (1,448 votes) defeated Corbett (1,225 votes) in the December runoff election.

Financial reports are readily available on the Supervisor of Elections website www.votenassau.com.   But I thought it might be helpful to examine the last race to see how much candidates needed to run a campaign.In reviewing the tables presented, please keep the following points in mind:

Number in parens ( ) represents number of contributions per category 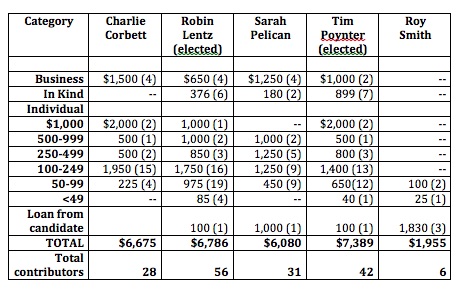 Can we draw any conclusions from the table on the left? Here are some observations:

Monetary and In-Kind Contributions from Businesses 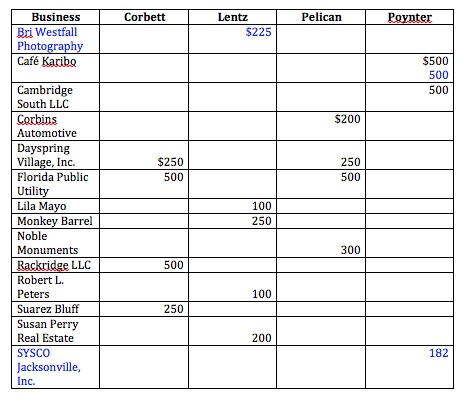 The table below reflects how the candidates used their contributions in support of their campaigns. Corbett spent the most money on electronic and print media, far outpacing the remaining candidates. Poynter spent considerably more money on signs than any other candidate. Lentz outpaced other candidates in spending on associated campaign paraphernalia. Poynter’s expense of $414 money for gas reflected his fueling the fire truck borrowed from Jacksonville by the Local Firefighters to advertise his campaign. 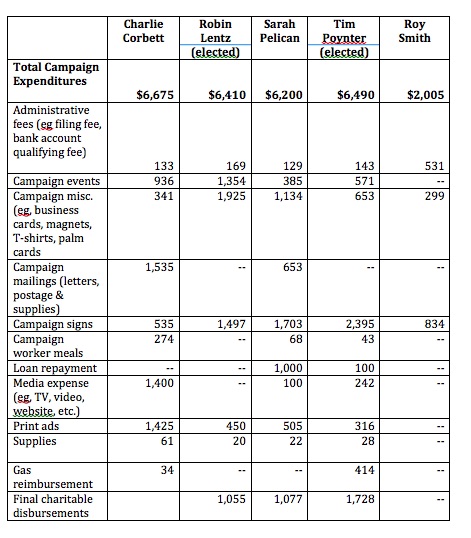 According to Florida law, any money contributed to a campaign but not accounted for in expenses must either be returned to contributors on a pro rata basis, or donated to an organization that qualifies as a 501(c)(3) organization, according to the Internal Revenue Service. Candidates for partisan positions or candidates for state office have additional options.

Following the last city election, three local candidates had contributions in excess of campaign needs, which they chose to donate to charitable organizations as reflected in the table below. Since both Corbett and Smith spent all contributions in support of their campaigns, they had no excess funds to distribute. 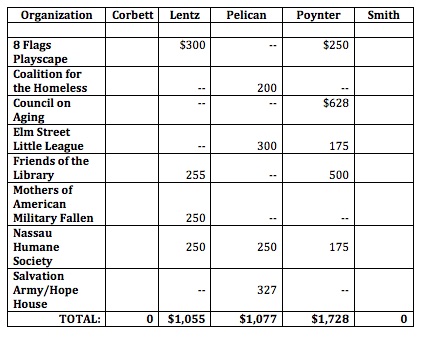 Subtracting the surplus contributions from the campaign expenditures reported, we see that campaign costs for three of our candidates—Lentz, Pelican and Poynter—are even lower.

It would appear that a candidate can mount a successful campaign with around $5,000 in contributions.

Campaign financing is complicated. For more information consult information provided by the Florida Department of State, the Nassau County Supervisor of Elections, and the City Clerk of the City of Fernandina Beach. 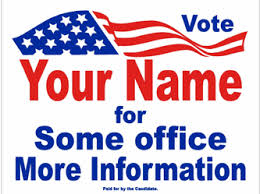 Although any potential candidate certainly must consider financial matters, such concerns are not insurmountable in Fernandina Beach. More important is developing a message and convincing the voters that you best represent them in spending their tax dollars to maintain the quality of life we have come to enjoy and the future we envision as a vibrant, relevant community, even as Yulee eclipses us with population and new development.

Mayor Ed Boner and Commissioner Pat Gass will see their first terms end this year. It is too early to tell if either will seek a second term, but it is not too early for people interested in serving on the city commission to start weighing the pros and cons of throwing their hats in the ring.

According to the Supervisor of Elections Website www.votenassau.com, the deadline for voter registration for the November 3, 2015 Fernandina Beach General Election is October 5, 2015. Information for potential candidates regarding qualifying dates will be posted on the Fernandina Beach City Website (fbfl.org) when the Clerk’s Office makes that information available.

I’m tired of hearing it said that democracy doesn’t work. Of course it doesn’t work. We are supposed to work it. ~Alexander Woollcott

Very interesting analysis and it is good to see that a successful campaign can be mounted for the $5,000 – $6,000 figure. Always intriguing to follow the money. Thanks Suanne.