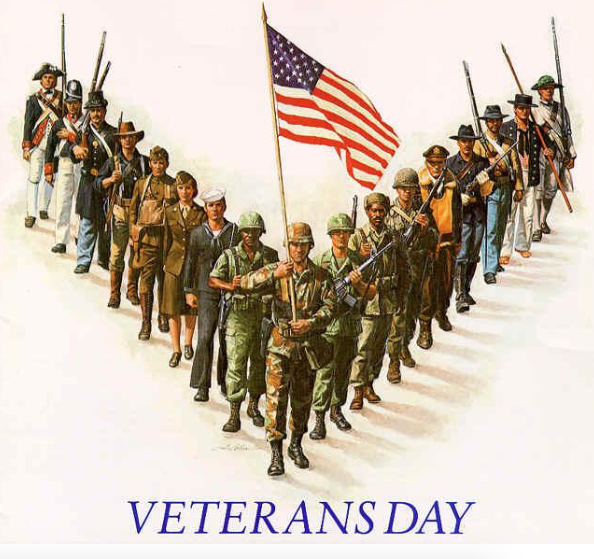 On November 11, Americans observe Veterans Day.  Originally it was called Armistice Day to mark the end of World War I: “the war that would end all wars.”  Major hostilities of World War I were formally ended at the 11th hour of the 11th day of the 11th month of 1918, when the Armistice with Germany went into effect.  The day was renamed Veterans Day in 1954.

President Woodrow Wilson, on the first anniversary of the Armistice, delivered an Address to the Nation in which he said:

“Out of this victory there arose new possibilities of political freedom and economic concert. The war showed us the strength of great nations acting together for high purposes, and the victory of arms foretells the enduring conquests which can be made in peace when nations act justly and in furtherance of the common interests of men.

“To us in America the reflections of Armistice Day will be filled with solemn pride in the heroism of those who died in the country’s service, and with gratitude for the victory, both because of the thing from which it has freed us and because of the opportunity it has given America to show her sympathy with peace and justice in the councils of nations.”

Twenty years later Americans found themselves once again preparing for war.  World War II was then followed by conflicts in Korea, Vietnam and the Middle East.  While the locations and the enemies have changed from conflict to conflict, one constant remains:  America’s reliance on the patriotism, dedication and selflessness of those willing to take up arms to defend her.

Let us resolve to prove ourselves worthy of our Veterans’ sacrifices.  The poem below is the Fernandina Observer’s message of thanks to America’s Veterans.

Unselfishly, you left your fathers and your mothers,
You left behind your sisters and your brothers.
Leaving your beloved children and wives,
You put on hold, your dreams-your lives.

On foreign soil, you found yourself planted
To fight for those whose freedom you granted.
Without your sacrifice, their cause would be lost
But you carried onward, no matter the cost.

Many horrors you had endured and seen.
Many faces had haunted your dreams.
You cheered as your enemies littered the ground;
You cried as your brothers fell all around.

When it was over, you all came back home,
Some were left with memories to face all alone;
Some found themselves in the company of friends
As their crosses cast shadows across the land.

Those who survived were forever scarred
Emotionally, physically, permanently marred.
Those who did not now sleep eternally
‘Neath the ground they had given their lives to keep free.

With a hand upon my heart, I feel
The pride and respect; my reverence is revealed
In the tears that now stream down my upturned face
As our flag waves above you, in her glory and grace.
Freedom was the gift that you unselfishly gave
Pain and death was the price that you ultimately paid.

Every day, I give my utmost admiration
To those who had fought to defend our nation.