Submitted by Peggy Bulger
Special to the Fernandina Observer
October 14, 2021

[Peggy is well known on Amelia Island for her contributions to the Amelia Island Museum of History, the Friends of the Library and other organizations.  Pre retirement, Peggy headed the American Folklife Center at the Library of Congress.] 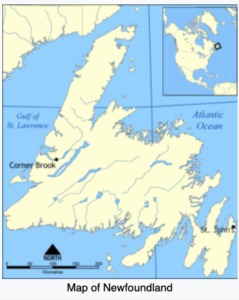 Last month my husband Doug and I were finally able to get back to our summer home on the island of Newfoundland, the most eastern point of North American soil.  Up until 1949, Newfoundland was an independent country. An island of 42,031 square miles and approximately 478,000 citizens. In 1949, Newfoundlanders voted to became Canadians, joining with the people on the mainland just to the north (Labrador) to form the newest province — Newfoundland and Labrador.  However, the island of Newfoundland has maintained its unique culture and independent thinking up to the present.  It is this island culture, based on mutual need and human connection that is the magic of “The Rock”.  Doug and I have been journeying to a tiny outport village on the Bonavista Peninsula of Newfoundland since summer of 1986, when we bought a historic house on a cliff overlooking the Bonavista Bay for $500 (but that’s another story).

Fast forward to summer of 2021.  We needed to check on our summer home, which had been empty and shuttered for two years due to COVID travel restrictions.  We were worried about the logistics and the safety of traveling across the border during an active pandemic, but we were gratified that our instincts had been right (it would all be fine). Thankfully, we were able to be part of a wonderful month of reunion, cultural sharing and reconnecting with our summer neighbors. Just escaping the political grand-standing and dangerous divisions of the American response to COVID was a restorative balm!

At the border between Calais, Maine and St. Stephen, New Brunswick, we had to show our proof of being fully vaccinated, and also have the results of a negative COVID PCR test that had been performed within 72 hours of arriving at the border.  That being done, we answered the usual border queries . . . Do you have any alcohol? Are you leaving anything of value in Canada?  Do you have any plants or seeds? . . . And a new question this year — Do you have any cannabis products?  Our answers — No, no, no . . . . no, but do you have any? 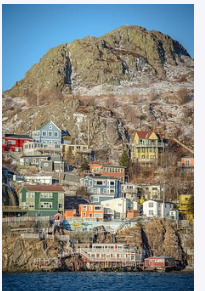 Once on Canadian soil, we traveled through New Brunswick, down the eastern coast of Nova Scotia and onto the island of Cape Breton, to arrive at the ferry terminal in North Sydney. This was a 12-hour journey but well worth the time and kilometers. We were booked on the 6-hour midnight ferry to Port Aux Basques on the western side of Newfoundland. There is a ferry that lands only 2 hours from St. John’s, but that takes 14 hours!

When you arrive on Newfoundland you are struck by how very different this Maritime Province is from all of the others.  It is rugged, majestic, awe-inspiring and very sparsely populated.  It is like stepping back two centuries to the environment and culture of 1800s Ireland.  Traveling through much of the island, you are “off the grid” with no cell phone reception and certainly no WIFI. The one mass media connection you will have is CBC Radio One. This is Newfoundland’s equivalent to NPR with a local accent and humor.  Both owe much to that Irish heritage of the past.

We arrived on August 16th at 7:00 am, the CBC announcer was in the middle of morning news.  “There are 16 cases of COVID-19 on Newfoundland, no deaths, no hospitalizations.  If you were at the Tim Horton’s on Eastern Boulevard in Corner Brook between the hours of 8:30 to 10:30 am yesterday, please get a COVID test, you may have had contact.”  WOW!! What a difference. The Newfoundlanders’ united battle with this deadly virus was immediate and embraced by all. The numbers bear that out.  But COVID is just the latest life challenge to be conquered in order to survive on “The Rock”.

Newfoundlanders are both extremely independent and totally interdependent. Living in an isolated environment with close neighbors necessitates a degree of sharing and empathy that is fast disappearing here in the states.  In our village of Keels (population 67), the entire town is not only connected by proximity, most are also related!  Of course, relatives are not always friends, and strangers are not strangers for long in a Newfoundland outport.  There is an unspoken sense of obligation that is true for everyone (even us summer “come from away” people) that we all are in this adventure together, and we need to get along to make it. There are many examples . . .

Each summer, when we arrive in Keels, it takes at least six strong backs to launch our wooden “speedboat” into the harbor.  Selby (owner of the General Store and Post Office) gets the word out and within a few hours, there are at least eight folks assembled and ready to haul the behemoth into the water. With no payment anticipated and no excuses given, the boat is launched and a 12 pack of Black Horse beer is shared along with the latest news and gossip.

In early August, when the caplen are running, the word goes out and everyone who wants to gather these tiny fish that roll on the shore to spawn will descend on the beach and have a caplen party. Caplen can be eaten, they can be spread on the garden as fertilizer AND the caplen bring in the whales, so an extra benefit is the sight of humpbacks breaching and feeding in the harbor.

There are three widows in our town, all in their late 80s and living alone.  There are always younger women who stop by to help clean, cook and take the ladies on walks to the General Store. Although living alone, no one is truly alone in Keels.  This is the true meaning of community.  The nearest police station or medical facility is in Bonavista, 2 hours away. The Volunteer Fire Station is 15 miles away in Kings Cove, and their coverage is for at least six outport villages strung out along the Bonavista Bay. All able-bodied men are part of the “force”.  Women and children know to start the tea and sandwiches and bring whatever the force needs to get the blaze under control.  This is interdependence in action and common sense.

This past summer was exceptional for Doug and me as we were in Newfoundland for the 20th anniversary of 9/11 . . . it is hard to believe that it’s been 20 years since that awful day and defining tragedy for all Americans.  However, in Newfoundland, this day and the week that followed were a test of local resourcefulness, quick decisions and total empathy and generosity.  On September 11, 2001, when US airspace was abruptly shut down to all air traffic due to the terrorist attacks, there were many jumbo jets in the air, flying from Europe and Africa to cities in the USA.  The tiny town of Gander, Newfoundland is home to an airport that can accommodate wide-body jumbo jets.  Back in the 1940s, Gander was a refueling stop for jets traveling to Europe or Africa. Remember, Newfoundland is the eastern-most point of land in North America, and perfect for facilitating a trip to Europe back when jets couldn’t carry the amount of fuel necessary to cross the Atlantic Ocean from a more inland airport. 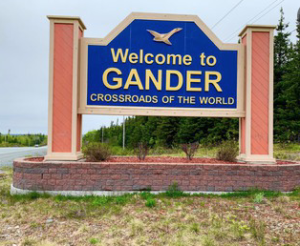 On the morning of 9/11/2001, USA air traffic control contacted Gander International Airport to announce that “several” jumbo jets needed to land and could Gander (population 10,545) handle these unexpected “visitors” for an unspecified amount of time?  By early morning, the news on TV was shocking everyone internationally, and Newfoundlanders were appalled and heartbroken – just as all of us.  The mayor and city council knew that this was one of those times where humanity would survive only with a united response to an evil act.  Gander residents quickly dropped everyday life and promised “all hands on deck” to welcome these airborn refugees and take care of them for whatever amount of time was needed.  In all, 38 wide-body aircraft landed at Gander airport within 5 hours, carrying 6,600 “plane people”.  The stranded travelers didn’t know what was happening, as it was determined by airline officials not to tell them of the terrorism until people were able to deplane.  The shock, disorientation and grief experienced by the plane people on arriving was crushing.  Each plane was “adopted” by an organization, church group, neighborhood, outlying village etc.  Every public building, from the schools to City Hall, as well as most private homes, were repurposed to house and feed this enormous influx. The one pharmacy in town opened its doors to ensure that all who needed critical medications could get them, the local Humane Society vet single-handedly ensured that all animals were deplaned, fed, watered and taken care of. There was no thought of money exchange or obligation . . . this was interdependence in action. 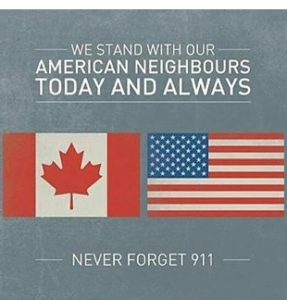 Friendships developed between hosts and visitors that live on to this day.  The town was able to house, feed, do laundry, shop and entertain the plane people for what turned out to be a six day “layover”.  This remarkable story of human kindness and empathy has been written about in three books and has been immortalized in a Broadway musical “Come From Away”.  On 9/11/2021, CBC Radio One aired a three-day tribute to this response to terrorism.  The program was a montage of oral histories and interviews with those who lived through the six-day ordeal – both locals and visitors.  Instead of a heart-wrenching recap of the terrorism and human toll it took on those who lost loved ones, the tribute in Newfoundland was a celebration of 9/12 – the unconditional love that created a safe space and comfort for strangers who needed the compassion and care to survive such an inhuman act of hate.

People ask me what I love about Newfoundland – I hope this gives a sense of why I always count the people first.  Dramatic scenery, whale-watching, flora and fauna are all outstanding, but the Newfoundlanders themselves are what makes this place so special.  I hope that some of you will get to visit “The Rock” in the future and find a sense of independence with interdependence as you visit.  I also hope that we, here in the United States, can reclaim that human connectedness and spirit of generosity and care for all of our neighbors and also the strangers that may be stranded in our orbit.  I know that we are able and willing.