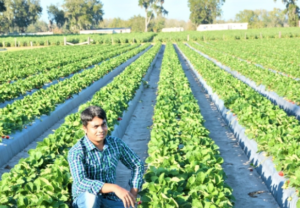 A University of Florida study forecasts state tomato, strawberry and bell pepper growers could lose up to $400 million a year if Congress ratifies the U.S.-Mexico-Canada Agreement (USMCA) without measures preventing Mexico from “dumping” subsidized produce into American markets.

The University of Florida’s Institute of Food and Agricultural Sciences (UF/IFAS) study examined potential impacts on three crops if the updated iteration of the 1994 North American Free Trade Agreement (NAFTA) is ratified as is by Congress.

According to the study, agriculture products imported from Mexico have cost Florida farmers up to $3 billion since 2000.

“Similar to NAFTA, the current version of the proposed USMCA does not provide protections for U.S. growers, particularly those that produce for the winter season market, from seasonal losses,” the study states. “The continuation of these trends will likely result in continued losses for the fruit and vegetable industry (and overall economy) in Florida.”

The broader implications for Florida’s $12 billion a year agricultural industry and the 100,000 residents it employs has spurred the state’s Congressional delegation to introduce a bill that restores protections for Florida farmers written into earlier versions of the USMCA.

The “Defending Domestic Produce Production Act,” introduced as Senate Bill 16 by Florida Republican Sen. Marco Rubio, and as House Resolution 101 by Rep. Vern Buchanan, R-Sarasota, will allow farmers to bring grievances over seasonal “dumping” of subsidized produce to arbitration on a regional rather than national basis.

“Every American grower should have the right to bring a case against unfairly traded imports that cause legitimate injury to our domestic producers,” the Florida Strawberry Growers Association said in a recent statement, noting “bipartisan support by every member of the Florida delegation … speaks volumes to the importance of this legislation.”

Rubio introduced his version of the bill on Jan. 3. It was referred to the Senate Finance Committee, where it remains. Buchanan’s bill was introduced on Jan. 31. It remains unheard before the House Subcommittee on Trade.

“Our beleaguered growers continue to be harmed by Mexico’s unfair subsidies and illegal seasonal dumping,” Buchanan said when the bill was introduced. “This legislation will level the playing field for a vital industry to Florida’s economy.”

“Rep. Buchanan’s ‘Defending Domestic Produce Production Act’ equips our seasonal and perishable industry with a workable mechanism to address unfair trade practices,” Florida Farm Bureau President John Hoblick said in a statement. “A solution is long overdue, and it’s time we stand up for free and fair trade for our Florida farmers.”

“Those Mexican fruit and vegetable subsidies, often upwards of $200 million a year, have accelerated the modernization of Mexico’s produce sector at rates only large government monies can accomplish, unfairly enabling the Mexican industry to expand by a multiple of 52 since 2000,” Florida Fruit & Vegetable Association Mike Joyner added in a statement.

In value terms, the study states, “imports of these commodities from Mexico increased from $2.16 to $3.76 billion, a 74 percent increase, including 38 percent for tomatoes, 91 percent for bell peppers, 169 percent for strawberries, and a 48-fold increase for blueberries.”

“Concurrent with the increased Mexican imports, production of some fresh fruits and vegetables in Florida has declined,” the UF/IFAS states. “Between 2010 and 2018, production value of [Florida] tomatoes, strawberries and bell peppers decreased by 58 percent, 22 percent and 27 percent respectively.”

In addition, the study calculates, in 2018 “the volume of vegetables in Florida that were not sold, presumably due to poor market conditions, nearly doubled from the previous year to over 90 million pounds, representing 2.7 percent of all vegetables produced.”