“At 03:21am on March 31, 2013, the Fernandina Beach Fire Department was dispatched to the report of a residential structure fire located at 1012 Calle Corta. Responding department personnel were advised that neighbors could not confirm the resident was out of the building. When Firefighters arrived on scene they observed heavy fire and smoke conditions. The first arriving crews entered the home to perform a primary search for occupants and found the resident still inside the structure. Fernandina Beach Firefighters inside the structure quickly rescued the man from the burning building and began treating the patient, transporting him to Baptist Hospital where he was later pronounced dead by Hospital Staff.

Fernandina Beach Fire Department along with Nassau County Fire-Rescue assumed a defensive attack on the fire, due to heavy fire conditions that made the building unsafe for crews to enter. The three-bedroom house was more than 90% consumed by flames. The fire was brought under control when firefighters were able to gain access to the interior of the home. 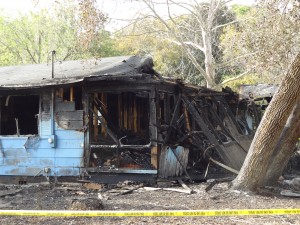 Fire damage to the dwelling was heavy and estimated to be a total loss. Due to the intensity of the fire, difficulty gaining access, and multiple exposures it took sixteen Firefighters approximately two hours to completely extinguish the fire and overhaul all hot spots. There were no Firefighter injuries reported as a result of this fire.