After months of debate involving applicants, city staff, Historic District Council and City Commission, the variance requests filed by the Dressler Family Estate were finally approved—but not without conditions. 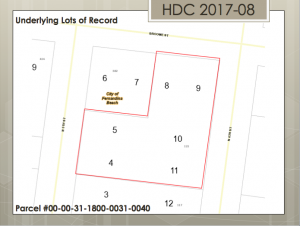 Commonly called the Chadwick House for its original owner, the existing house straddles lots 10 and 11 on the property and encroaches slightly into lots 4 and 5 to the rear of the structure.

The HDC allowed the owners to separate lots 8 and 9 on the corner of Broome and N. 6th Street to form a 100×100 buildable lot. Sanborn insurance maps clearly indicate that at one time these lots were separate from the main structure and contained their own residences. A deed restriction will run with the property guaranteeing that only one residence may be built on the combined lots 8 and 9. Combining these two lots will also save an important tree.

The HDC had more difficulty in deciding to grant the variance to separate lots 4 and 5 on the North 5th Street side of the property. Because the main residence at 121 N. 6th Street encroaches into lot 5, the applicants proposed combining lots 4 and 5 but truncating them to a depth of 80 feet. This would allow 20 feet to remain with the primary structure. The resulting lot will be 100×80 feet. Staff verified that by truncating the lot, it would remain a buildable lot. A deed restriction will also run with this property, limiting the number of permissible residences to one for the combined lots.

Granting of these variances was a complicated process. The city’s Planning Department recommended denial of the variances because they did not satisfy every element of the code requirements. However, Preservation Planner Sal Cumella noted special circumstances, which the HDC might consider in hearing the case on February 16, 2017. Following discussion, a motion was made to approve “uncombining” lots 8 and 9 from the main property. Although three HDC members voted to approve the variance, four affirmative votes are needed to approve a variance, so the motion failed.

The applicants next appealed the denial to the Fernandina Beach City Commission (FBCC). The FBCC heard the case on May 16, 2017 and remanded it to the HDC for further consideration, amid threats of legal action from the applicants.

During its second hearing before the HDC, Joe Cutajar, agent for the Dressler Family Estate, explained that the family might or might not implement the variances if approved. He went on to explain that because the property was so large and had been on the market for some time, the owners merely wanted to offer to potential buyers a series of options.

Neighbors expressed support for granting the variances, citing their desire for more permanent residents in the neighborhood and concerns over security with such a large, unoccupied property in an upscale neighborhood. Neighbors believed that vacant houses tend to suggest that “there is something wrong” with a neighborhood, and that vacant homes fall into disrepair. They indicated a preference for a vibrant neighborhood with more families able to live downtown than the sight of empty lots. The also expressed their belief that their property values would be helped with the additional residences in the neighborhood.

HDC member Robert Erickson voted against approval of the variance, citing his concern that by separating lots 4 and 5, the main house would be left with almost no backyard.

In a related but separate case the applicants also sought permission to demolish or move various auxiliary buildings on the separated lots. The HDC approved demolition for one of the structures, which had been built in the 1970’s, outside the time frame for the Historic District. However, they deferred decision on moving or demolishing other outbuildings that they considered to be dating to the period of the main house. They reasoned that should the parcel be split into three, future owners of the buildable lots separated from the main house might prefer to keep the outbuildings or incorporate them into new construction.