The sun woke me up early in southern Belize and I was well rested so I set off into Placencia town to see who else was stirring at this hour. As I had guessed, lots of local Belizeans were out too, but mostly heading to their jobs in the nearby guest houses, not out for a vacation stroll like I was.

At the municipal dock more workers were crowded onto small power boats taking them to resorts across the water. I wandered along the shoreline and to a deck we had noticed the day before, the Evolution Beach Gym. No, I wasn’t there to exercise, I was there to look for seahorses that I had been told sometimes hang out among the mangrove roots.

The owners, Edgar (Galo) and Melanie Carballo, and their friendly dog and cat came out to greet me on their deck. Before long Galo and I were deeply involved in a conversation about the biology of the mangroves, his work to restore them on a tiny island his family owns, and all sorts of other interesting topics that came up when I mentioned I was a biologist.

It turns out the name Evolution Beach has a deep meaning here. When I was in Placencia 30 years ago this area was heavily degraded and full of trash, or so Galo tells me, since this detail was lost in my memory of the place. But he and his family set out to rehabilitate it, to clean it up and to nurture the mangroves back to health, and the place “evolved.” Thanks to their protection, until two years ago this deck was wonderfully shaded by a large mature Moho tree, and sheltered by thick branches of an ancient mangrove tree.

But horribly, when they were away catching lobsters someone came onto their property and cut down the shade tree and thick branches of the large old mangrove tree in front of their deck. Why? Maybe someone had a grudge against the dock being built nearby? Who knows? But the perpetrator was caught on camera, arrested and fined $13,000 Belizean dollars, a significant sum in these parts.

The place is still beautiful, I told Galo, and I meant it. The huge mangrove survived for the most part, with some propping of the large injured branch and some nourishment of some sort that Galo says he gave to the mangrove. More stilt roots are forming, and fish are swimming in the clear water, visible from the deck.

But what about the seahorses? Galo hopped up on the dead branches resulting from the desecration and climbed to the end to try to find a seahorse for me. But none were visible. Instead what he found was some shreds of fishing net and flotsam from the recent hurricane that was tangled in the mangrove roots. And there, instead of seahorses, were predatory crabs that he says eat seahorses!

For the next few minutes Galo perched on the limb tossing these small crabs to the deck where I was standing. With his encouragement I stomped on the crabs and tossed their carcasses back in for the fish to feed on. Later in the day when he is cleaning the fresh caught lobsters and tossing in scraps, the marine world in the area comes to life. Rays and barracuda and smaller fish come in to gorge on this food, a “show” free for the taking most every afternoon.

The clear water surrounding the mangroves near the Evolution Gym captivated me. I’ve seen mangroves all over the world, but not in clear water: usually the water is so muddy that the idea of jumping in to look underwater is not very compelling. But here, perfect!

During my 10 days in Belize this trip, I carried my mask and snorkel to Evolution Beach a few times to pop underwater to look for seahorses. When they are moving across open water they are easy to spot—and that’s how Galo sees them from his deck and he even sent me a video to prove it. But otherwise seahorses are perfectly camouflaged among the sponges and underwater plant life growing on the mangrove roots. 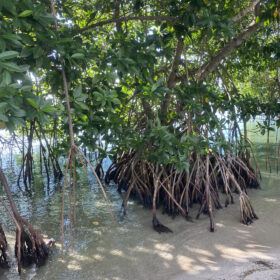 It was an idyllic experience drifting among the hanging mangrove roots, carefully scanning them for tiny seahorses. Lots of other marine life crossed my path while I was searching. I watched mangrove snappers and grunts hiding among the roots, silvery schools of anchovies swam around me, and hermit crabs, whelks and sea stars studded the seafloor. At one point a fish larger than me glided quietly by, close enough to touch, startling me with thoughts of “shark!” But no, it was just a large but harmless tarpon. I never did find a seahorse. But I found a peaceful and easily accessible underwater world to explore.

I can’t wait to go back and search some more!

Pat Foster-Turley, Ph.D., is a zoologist on Amelia Island. She welcomes your nature questions and observations.  patandbucko@yahoo.com

Thanks so much for taking us with you to Belize!! I enjoyed it as always Ms. Pat!!

Marlene, how can we expect the law to be followed when the l...
wpDiscuz
1
0
Would love your thoughts, please comment.x
()
x
| Reply
Comment Author Info