Every year Bucko and I seek out a new adventure as our Christmas celebration with each other. With no children or grandchildren and nothing we want or need to give each other for the holiday, a new experience for us is called for. Increasingly as we age we avoid over-packed highways and airports during this high travel period. So, any new adventure has to be within easy driving distance.

We’ve lived here on Amelia Island for more than two decades and have just about seen everything nearby, but I am always on the lookout for something new. This year it was Rooterville in Melrose, Florida, a place I had not heard of before, although I often visit the area.

Rooterville (https://rooterville.org/) is a sanctuary for pet “miniature pigs” that grew to normal pig-sizes and various other farm animals that have been rescued and loved and displayed. We arrived December 24 around noon on one of the coldest days in recent memories. Aside from a handful of employees, Rooterville had no other people there besides us, although they told me they are often very busy on weekends. And I can see why. It’s a really fun place for animal lovers.

When we first entered the gate we talked to one employee and asked which animals it was okay to feed the cut up apples and pineapple that we brought with us. We were directed first to “Tinsel” who loves apples. Tinsel and his companion “Holly” were once young calves that were left on the “dead pile” at a stockyard, being too weak to stand. A rescue organization in upstate New York found them and nursed them back to health. Now they live at Rooterville, accepting apples and treats and happily allowing visitors to “cow cuddle” with them. We met Tinsel and Holly on Christmas Eve. Perfect!

After the obligatory petting and treat dispensing with these cattle, Bucko and I wandered over to a large enclosure filled with pigs of all shapes and sizes. A few were pot-bellied pigs that grew beyond their predicted size, and many of the others were rescued like Tinsel and Holly from factory farming conditions. Their original sow “Stella,” like most factory-raised breeder pigs, was confined in a small pen where she could hardly turn around, and her piglets were taken away to be used for food when they were two weeks old, again and again and again. After Stella had reached the end of her useful reproductive years she was transported to a slaughterhouse. But she never got there. Somehow or another, they say, she had fallen off the truck. At any rate, Stella lived at Rooterville for many years and was joined by dozens of other pigs to live out their lives in contentment. 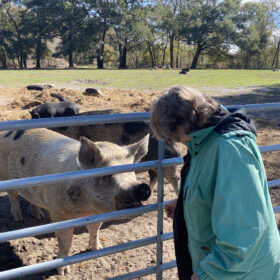 I happily fed a bunch of pigs that crowded the fence line to receive the fruit pieces I offered, but it was hard to get past the goats that shared their pen and “hogged” the treats instead of them. The open yard was also full of wandering pigs, and dogs and cats and guinea fowl, turkeys and chickens. One large mixed breed dog was accompanied by a dachshund dressed in a coat on this cold day. The small dog whimpered and rolled on its back begging to be petted, which was a bit difficult since the larger dog with a head as big as mine kept trying to lick my face when I squatted down. I love dogs, and this was a lot of fun, but maybe not so much for those who don’t.

Miniature horses and other pigs and cattle lived in pastures further from the entrance, but visitors can take a trolley tour around the sanctuary, and engage in other guided activities. Judging from their large, well-stocked gift shop there must be lots of visitors during the year and many donors to keep the animals fed and cared for.

The entrance sign says, “Visit Rooterville where animals are friends and not food,” and the place does its part to show the horrors of factory farming, where animals live in often cruel conditions to supply us with milk and meat and eggs and all the rest. Throughout the farm, signs are posted with scenes of common practices at factory farms and the horrors their rescued animals survived before being the lucky ones to end up at Rooterville.

It was a strange way to spend Christmas Eve day, I must admit, but I enjoyed the animal interactions, and now, as is its mission, I have become more aware of factory farming practices. I am not turning into a vegetarian just yet, but I must admit that I will think long and hard about the meat and chicken that I consume.  And, I guess that is as good a Christmas message as any.

Pat Foster-Turley, Ph.D., is a zoologist on Amelia Island. She welcomes your nature questions and observations. patandbucko@yahoo.com

Sounds like a fun day, Pat. Thanks for sharing. It is true that as one learns more about where most of our chicken, pork, and beef come from, they are more likely to want to choose organic and humanely-raised meat products. Ignorance is bliss, but dangerous.

Pat and Bucko have done it again!

You are Always enjoyed and a source of new learning!

I will have seek out Rooterville for a visit!! I have long stopped eating meat because of factory farming. If you DO choose to eat meat, I recommend seeking out small local farms where you can rest assured that the animals are humanely slaughtered. Many large processing facilities HAVE sought out assistance from renowned animal welfare expert Temple Grandin to design their facilities so as to make them more humane for both the animals and workers, but most sadly just don’t care. THAT is why I protest with my WALLET and no longer buy meat that isn’t from a small farm. THANK YOU for a great article once again Ms. Pat!!

Thanks so much for the interesting article about Rooterville. After reading it, I’m even more happy about being a vegetarian since 1987.

One of the great values of media is to inform with data and ...
wpDiscuz
4
0
Would love your thoughts, please comment.x
()
x
| Reply
Comment Author Info