With the development of the annual budget all city departments are required to evaluate fees charged for services. Through ordinance the FBCC then sets the fees, which are based on cost to cover services and facility rentals. This was the first opportunity commissioners had to discuss fees for the upcoming fiscal year, since the topic had not been discussed in earlier budget workshops. 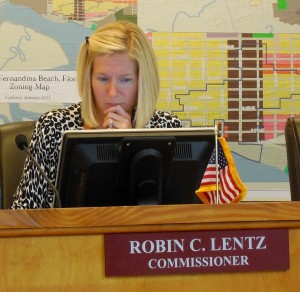 Commissioner Robin Lentz focused attention on Recreation Department fees proposed for pool and weight room facilities. She said that the combined monthly fee for family use exceeds that charged by the YMCA and does not provide the same type and level of service. Nan Voit, Parks and Recreation Department Director, said that the increase from $85 to $98 came about because the city discovered that it had not been charging enough.

Lentz replied, “I guess I’m really struggling with how expensive that is because you can have a YMCA family membership for $89 per month that includes child care and group exercise classes. Our price is for city residents. And whether we have 3 members or 300 members, it’s going to cost the same amount of money to keep that pool open and to keep the weight room open. … It seems like a whole lot of money …”

Voit countered that some fees had been reduced, because of the formula used. “Previously,” Voit said, “there was no formula. Prices were just randomly assigned. Now there is a formula.” Voit did not explain the genesis of the formula.

“It just seems unreasonable to me,” Lentz said, “that a city resident would pay $98 a month for a family membership. It pushes people to say, ‘I’d get a better deal if I go to the YMCA.’ To me the purpose of having city recreation facilities is to make things a little more affordable.”

Voit said, “It was all based on a multiplier. If you guys want to change it, it was just done to make sense of how the fee was being calculated.”

In response to a question from Mayor Boner Voit said that there are about 7,000 visits to the weight room at Atlantic Rec each year. This number records visits only, not number of members or users.

“I don’t feel comfortable charging citizens to use a facility they have already paid for,” Lentz said in conclusion.

Gass suggested and Poynter concurred that Lentz could make an amendment to the fee. Lentz moved to do so but admitted that she had no idea what the fee should be and sought help from other commissioners. Commissioners engaged in discussion over both recreation fees and other city fees. Gass said that she would like to see all fees reconsidered. “When is enough enough?” she asked. “This is what people are so angry about. Every time they turn around, there is a fee.” She said that she wanted to go over the entire fee schedule at a separate meeting and that she did not want to approve the current fee schedule as proposed. 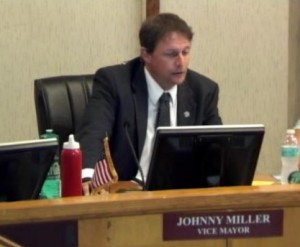 Vice Mayor Johnny Miller said that Parks and Rec is in the business of providing a service, not making a profit. He asked City Manager Gerrity if the policy was for Parks and Rec fees to be competitive. Gerrity said that there was not such a policy. He cited a study done by Dave Lott in 2012 that served as the basis for many city fees. Miller continued, asking if revenue generated by Parks and Rec went into the city’s General Fund or whether it was earmarked for that department’s use. Gerrity said that since those fees are not part of an enterprise fund, they go into the General Fund.

Miller said that he believed that activities that contribute to public physical fitness and good health are second only to providing services to keep the citizens safe and secure. “Why not make it so that it doesn’t cost anything?” he asked. 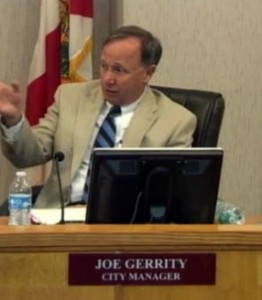 Gerrity reminded commissioners that the budget they had just agreed to during their earlier workshop was based on adoption of this fee schedule. Miller said he understood that but suggested that going forward the city separate those activities that benefit the wellness of the citizens from other fees. Gerrity said that while he did not disagree with Miller, there was a time when Parks and Rec was given a mandate to generate more revenue. “That’s the way it was,” Gerrity said, “and I’m certainly not being critical. Those were tough times.” Miller endorsed Gass’ call for a workshop to discuss fees.

Commissioner Tim Poynter said that many facilities are free to the public, citing existing parks and equipment. He said there is a cost to providing services, and that if everything is going to be available free of charge, that means taxes will rise for everyone, including people who do not take advantage of parks and recreational programs. He asked Lentz what should be an appropriate fee to charge and she admitted she did not know, but believed the current fee is too high. “We need a rationale to set a fee,” Poynter said.

Boner suggested that since the proposed fee schedule was integral to the FY 2015-16 budget, the FBCC could approve the item and return in a couple of months to adjust it following more discussion. Gerrity agreed.

After more discussion and attempts at motions that indicated discomfort with the proposed fees, Commissioner Tim Poynter moved that the city adopt the current fee schedule as the schedule for the next fiscal year. Gass seconded his motion.

The motion passed unanimously on first reading after almost a half-hour of discussion. Consensus was that the commissioners would return to the matter in a future workshop.

Just to provide some further detail to Vice Mayor Miller’s mention of the “cost study” that was done of the P&R’s fees back in 2012 while I was assisting Joe during the initial budget efforts, Joe’s comments were spot on in that the Commission had raised a number of concerns about the underutilization of various P&R facilities and programs and wanted a better understanding of the current costs of such programs. This effort was intended only to be directional in nature in better identifying facilities and programs that needed a closer examination. It was performed over a couple of days whereas a detailed cost study would require a much longer time.
There is always a discussion in price setting about whether it should be based on a full-cost study (fixed and variable) or simply incremental costs. In my opinion it should be based on a fully-loaded analysis and then action can be taken to make the necessary adjustments. A wonderful analogy is in the pharmaceutical industry where consumer advocates complain about the high cost of medicine using the line that the incremental cost of producing a pill is less than a nickel. Of course the pharmaceutical companies respond by saying that while the variable cost is less than a nickel, the cost of producing that first pill is over $100 million when you factor in all the costs of research, trails and production factories.
The Commission should adopt a policy on how pricing should be established. If set strictly on an incremental basis, it is highly likely that the pricing would be well below market pricing and place an additional burden on the general taxpayers. At the same time, the taxpayers that don’t utilize the facilities will probably complain that the users should be paying the cost of operations ala the enterprise funds like the golf course.
Probably the best solution is a mix of both methods with some percentage of the fixed costs being factored into the pricing formula.