National Invasive Species Awareness Week is a nationwide event that occurs each spring to raise awareness of invasive species and how people can prevent their spread to protect natural ecosystems for future generations.  An invasive species is defined as an organism that is not native to the ecosystem under consideration and which causes harm to the economy, the environment and/or human health.

Many people on Amelia Island remain clueless about the dangers posed by failing to remove invasive species.  Even more ironic is the fact that some of these plants can be purchased at local nurseries or big box stores.  A major effort to attack this problem is driven by Kathy Russel, Fernandina Beach Parks & Recreation Manager, who regularly monitors and removes invasive species from City beaches and the Greenway.  But privately owned property near the Greenway or on the beach also host some of these plants.

What are common invasive plants on Amelia Island?

According to Jessica Spencer, an invasive plant expert with the U.S. Army Corps of Engineers (USACE), “In North Florida, we have seen certainspecies spreading into our area, including Brazilian pepper, asparagus fern and Russian thistle.  Brazilian pepper is the most widespread invasive plant in the state of Florida.  It is considered to be cold intolerant, but as our area has experienced milder winters, it has been increasing its numbers in North Florida.  It displaces native vegetation and grows very aggressively. It is related to poison ivy and burning it can cause irritation to the lungs.  Sensitive people may also have skin reactions to the oils in the sap and leaves.  Studies have shown that migrating birds prefer to feed on native fruits, but as native species are replaced by Brazilian pepper, birds will feed on those fruits as well.  This is likely the most common form of spread. Brazilian pepper can be replaced with native species, such as Dahoon holly or Yaupon holly, which still provide migrating birds with food, but do not negatively impact the environment or human health.

Asparagus fern is commonly seen in people’s yards and planters, but it is also easily spread by birds and other animals.  It is becoming a serious problem in Florida’s dune systems because it competes with the native vegetation that has adapted to support the dunes.  The plant’s stems and leaves are spikey, which deters any herbivores from eating it.  As it crowds out the native vegetation, herbivores like the gopher tortoise (which commonly make their burrows in the higher dune areas) are left with fewer food sources. 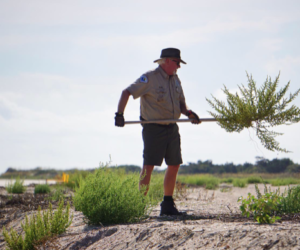 “Russian thistle (or tumbleweed) has also recently been spotted along our beaches. It is well adapted to harsh conditions and can grow aggressively along the beach.  The plant is known to grow fairly large (generally in a round shape that can be several feet across) and dries out as temperatures rise in the summer.  Once it dries, the branches are covered in small, sharp spines that can cause irritated welts if they puncture your skin.  As the plant dries out, the wind can snap it off and cause it to tumble down the beach, spreading the easily fractured, spiny branches as it tumbles.  The scattered spiny pieces can be very unpleasant for beach goers.  The plant can also cover the exposed dune areas where shorebirds prefer to nest.  These are just some of the species that local land managers are battling.”

Justina Dacey. Natural Resources/Agricultural Agent with the UF/IFAS Nassau County Extension Office,  recently made a video about the “mother of millions” and plans to make another on Russian thistle.  Also, this week she set up a Facebook page on invasive plants at: – UF/IFAS Coastal Invasive Species Removal that contains the video.   She provided the following links to help people learn more about invasive species:

How can residents help?

You can help by removing invasive species from your yard.  Do your part to celebrate National Invasive Species Awareness Week and participate in the “Stay-at-Home Weed Wrangle”.  Find an invasive species that you can controlin your own yard.  Take before and after pictures showing the work you did to eliminate the plant from your landscape.  Submit your pictures to the Weed Wrangle Facebook or Instagram page.

For more information on the Weed Wrangle click here.

The author acknowledges the assistance of Bev Lawrence in assembling this article.