from The County Insider
Office of the Nassau County Manager
July 29, 2021

At the Board of County Commissioners meeting held on Monday, July 26th, Emergency Management Director, Greg Foster, presented the 2021 Citizen’s Disaster Guide. This document includes information on various hazards such as hurricanes, tornadoes, and floods, shelter locations, tips on preparing an emergency supply kit, and what to expect if a widespread evacuation order is given.

The presentation also included information about the new Evacuation Zones that were established following a study conducted by Emergency Management, along with the Northeast Florida Regional Council and Florida Department of Emergency Management. The old map had all of Amelia Island and most of the Yulee area under Zone A. As a result, many people off the island who were in Zone A were electing to not evacuate because they felt like their threat wasn’t as great as others in that Zone residing along the intercoastal and on Amelia Island. Emergency Management indicated that they’ve also seen a decline in residents on Amelia Island who are willing to evacuate. 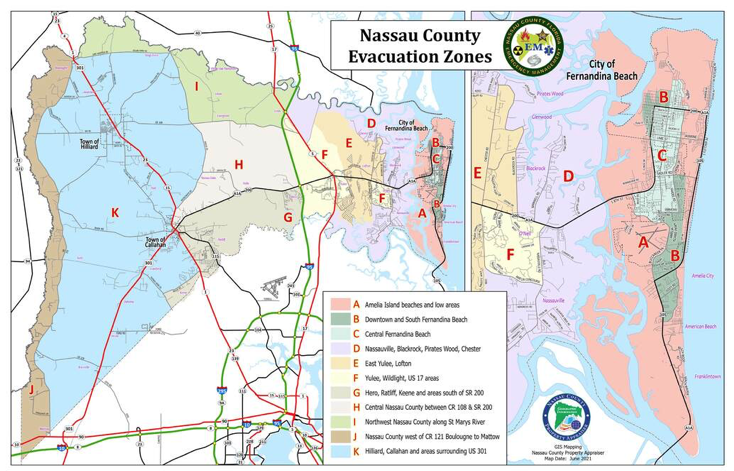 The new map now has 3 evacuation zones on Amelia Island which identify areas most likely to be affected by a coastal storm, as well as additional zones throughout the rest of the County clearly outlining where that area falls on the Zone Map. It’s important to note that anyone previously shown in a surge zone will still be in a surge zone. Only the letters of the evacuation zone have changed.

If you have any questions about the new Evacuation Zones, please contact Emergency Management at (904) 548-0900.