If the County continues to operate with its current financial plan it will continue deficit spending in the near term, cautioned Michael Burton, of Burton and Associates, the County’s financial consultant, at the County’s second budget workshop Tuesday morning July 7, 2015.

Available reserves will be reduced below the established minimum by 2017-2018. Burton reminded the Commission that, given current assumptions, beyond fiscal year 2017-2018 that cash flow may appear positive but other than funding for “fleet replacement” there is no capacity for capital maintenance or investment. He underscored that prior studies of necessary capital maintenance expenditure for the County demonstrate the need for the allocation of $7,500,000 per year.

The County has exhausted its ability to subsidize current expense budget short falls with the use of its 1 cent tax revenue that has been redirected from its intended use to fund capital projects. Under any budget scenario, over the next five years the County will require additional revenue. There was no challenge to this analysis by County Commissioners, staff, or any of the twenty or so County residents present. John Crawford, the County Clerk, did not attend. 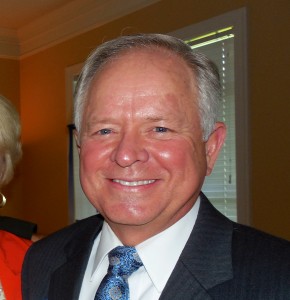 Crawford, who initiated an exchange of letters with Commission Chair Pat Edwards, wrote on July 1, 2015 referring to his “Fiscal Health Dashboard” analysis of County finances and the Burton evaluation “a comparison of two calculators (dashboards) using equal assumptions will result in the same mathematical outcomes.”

The need for revenue either in fiscal 2015 – 2016 and/or in 2016 -2017 depending upon budget scenarios is not in dispute, the source of that revenue whether an increase in millage rate, or a fire protection fee and/or in combination with an increase in sales tax or a gasoline tax has yet to be resolved.

The Commission will meet again on July 13 to review in detail revised budget models and is scheduled to adopt a maximum millage rate on July 27. 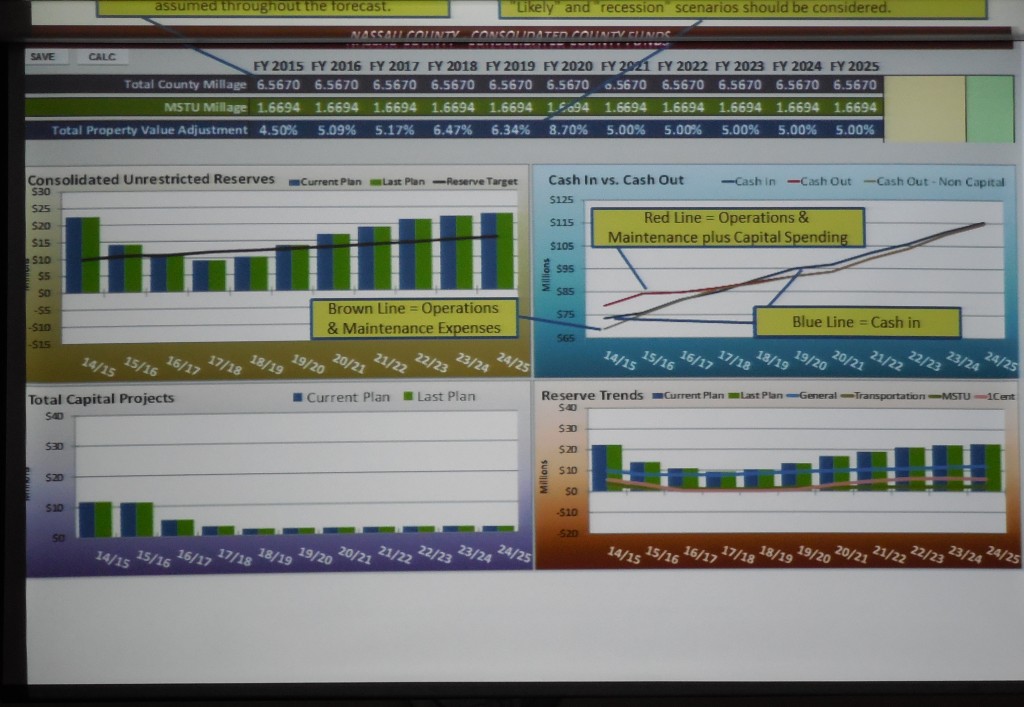 The interactive computer analysis provided by Burton allowed the County Commissioners to model outcomes by adjusting assumptions over its ten year projection. The Commission, by consensus, tempered and revised some of those assumptions. Property value adjustment was held to a 5% constant, as opposed to property values based upon State projections that rose to between 6% – 8% from 2018 – 2020. For the purpose of discussion the County millage rate was held at its current level and only “funded” capital projects were included. The Commission, with Burton facilitating, then adjusted the variables in the in the model’s budget forecast.

As the future requirements of the County were assessed included in the model for further review was an increase in employees to reflect the growth in County population expected during the next ten years. The estimate is of 10 – 12 additional employees per year, a total of 109. The County has reduced positions by a total of 68 since 2008. In the last ten years the population of the County has grown by 11,000 and is projected to grow by 15,000 in the next ten.

Added to the model during the discussion was the $7,500,000 baseline funding for necessary capital projects. There also appeared to be consensus that by not having available capital appropriations the County has, and will in the future, forego matching State and federal funding in the millions of dollars, and that such funding at some level needs to be included.

Adjusting the millage rate in stages to the amount needed to meet the County’s operational needs as well as to provide for funding of capital projects was submitted as a possible budgetary resolution. The proposal, depending upon variables in the County’s fiscal plan, would be, for example, to increase the mileage rate .6 in 2015 – 2016, .5 in 2017 – 2018 and .2 in 2020 – 2021. The model showed that if the Commission chose to implement this or a similar option, a homestead property owner with a $150,000 taxable value would see a total tax increase of approximately $15 per month. 65% of the County’s homestead properties are valued at $150,000 or less. A fire protection assessment or fee would be applied across the board without an adjustment for property value and equate to about $19 per month.

The Commission, without a decision, reviewed the implications of a 1 cent gasoline tax and the restrictions on the use of that revenue. The tax would raise approximately $1,500,000 per calendar year but could not be imposed until 2017. Similarly, there was discussion of the imposition of a potential increase in the sales tax and that discussion will continue at the next meeting.

A discussion of borrowing $10,000,000 presently allocated for Sheriff’s Administration Building and restoring that sum to the budget was left in limbo. Proposed was undertaking a fifteen year bank loan with principal and interest payments of $975,000 per year providing $9,000,000 to the budget. Discussion of the sale of the existing land currently used by the Department, its value and the need for potential remediation of the site before sale was deferred. 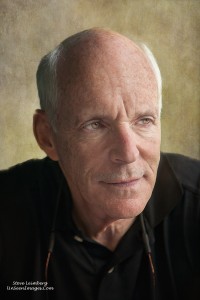 Adam Kaufman is a semi-retired mediator and attorney. A graduate of Northwestern University School of Law, he was born and raised in the Bronx, NY. and attended NYC public schools, including Stuyvesant High School. He still serves on the American Arbitration Association Labor Panel. From 1994 – 2005, he was Regional Director for the New York State Public Employment Relations Board.