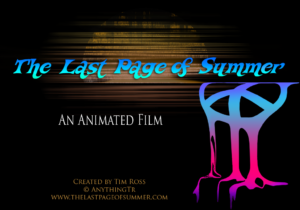 The US premiere screening for the feature animated film “The Last Page of Summer” will be hosted at Amelia Musical Playhouse on Saturday, August 8, 2020, at 9:00 PM under the stars. Admission is “Pay what you like.” The event will take place on the AMP lawn behind the Playhouse.

The comedy/adventure film is a trip back to the ‘Groovy Era’ where a sunshine-rock band gets caught up in the storm of changing times, with its future under threat by an elite musical establishment determined to rid the world of all things groovy.

The film, which features several voice actors from the community, will be hosted by its creator ( and AMP’s very own) Tim Ross. The film will run slightly over an hour. It is currently in the film festival circuit and will not see public release until next year. We look forward to sharing this unique and groovy experience!

Bring your own blanket or chair. Soft drinks and popcorn will be available! No reservations, no advance ticket sales. Call 904-277-3455 day of the screening to check if weather will cancel. AMP 1955 Island Walkway, Fernandina Beach.