More highlights from the June 3, 2014 meeting of the Fernandina Beach City Commission

The first June Regular Meeting of the Fernandina Beach City Commission (FBCC) was held on June 3, 2014 and lasted an hour and a half. The meeting began slightly later than scheduled due to overlap with a previously called Executive Session on litigation relating to the impact lawsuit.  The Consent Agenda and Resolutions were passed unanimously without discussion.  Other than items covered under separate Fernandina Observer articles published earlier, here are more issues discussed during the meeting.

Jennifer and Michael Harrison appeared before the FBCC during public comment.  Jennifer Harrison updated commissioners on actions to improve the Old Town Plaza.  She thanked City Maintenance Director Rex Lester for visiting Old Town and walking the areas of concern (the bluff and the plaza).  She also reported favorably on discussions with City Community Development Director Adrienne Burke.  She said that Fort Clinch State Park Superintendent Ben Faure was hopeful that the cost of perimeter plantings for the plaza might be approved in the next budget.  She credited Lester with a low cost idea to mark the corners of the plaza with rustic poles connected by ropes.  She thanked the FBCC for listening to her concerns.

In response to a question from Commissioner Charlie Corbett she replied that there are still problems with the trails down the bluff and driving on the plaza, but Old Town residents are trying to solve problems one at a time, starting with protecting the plaza.  She added that there might be funds left in the Old Town Bicentennial Fund to help defray costs.

Michael Harrison echoed a question raised by Commissioner Johnny Miller regarding the status of the Rock Tenn gate blocking Estrada Street.  City Attorney Tammi Bach responded that she has sent a letter to Rock Tenn and has received a response from their attorney committing to go over city concerns with his client.  Harrison said that he did not think there should be any issue about the gate removal and asked that the city keep Rock Tenn’s “feet to the fire.”

The FBCC passed four ordinances with unanimous votes on second and final reading.  No one from the public spoke to any of the issues.  Two of the ordinances–2014-15 and 2014-7 — were of a housekeeping nature.  The other two brought about more discussion among commissioners.

While most of the details had been thoroughly discussed on First Reading, Commissioner Pat Gass questioned the implementation date, should the item be approved.  Commissioners agreed to defer effective date until July 1, 2014, to allow restaurants to go through the permitting process.  Also in question was the cost of the permit.  Based upon a study of what is done in other communities, Senior Planner Kelly Gibson suggested two options:  a $55 fee, to include one follow up inspection from a complaint; or a $40 fee and a $15 fee for any complaint-based inspection.  Gibson reminded commissioners that the FBCC sets all permit fees as part of approving the annual fee schedule. But so that work could begin on issuing permits soon, commissioners dropped the notion of fees for complaint-based inspections and supported a $40 permit fee. 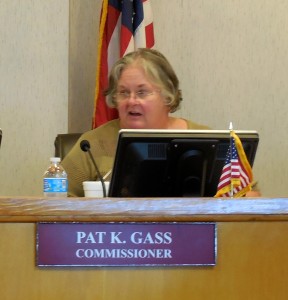 City staff prepared this ordinance basically as a clean up of the existing ordinance.  Commissioner Pat Gass raised several questions, to which Nan Voit, City Director of Parks and Recreation, responded.  The cemetery falls under the administrative responsibility of this department.  Gass questioned why change in plot ownership needed to go through the city and why there could not be more than two interments per plot.  Voit responded that the city can only keep accurate records if it knows about changes in ownership, and that “stacking” cremains in a lot would complicate both tracking location of specific cremains within a plot and excavating for future burials more difficult.  Voit reminded commissioners that the city is in the process of updating the Cemetery Master Plan.  Part of that plan speaks to building a memorial wall and garden where cremains could be scattered without need for a plot.

Voit also announced that the city will buy back no longer needed cemetery plots for $1,000 each.  This is a change from current policy, where the city buys back at purchase price.  Many of the lots in question were purchased many years ago for $300-400.  Because the cemetery is running out of space, it is desirable that unused plots be identified and made available to those families who need them.

Gass also discussed language in the ordinance regarding planting requirements and furniture, such as benches.  Voit replied that these items may be permitted following discussion with city staff.

Mayor Boner raised the question of design guidelines, pointing out that part of the cemetery lies in the city’s Historic District and that historic cemeteries are tourist attractions.  Voit replied that the ordinance speaks to types of materials that may be used for markers, but that design of the marker is considered to be a matter of personal taste and is not otherwise regulated.

City Manager Joe Gerrity announced that he plans to hold the first budget workshop for the FBCC during the afternoon of June 24.  This particular session will deal with enterprise funds and grants for non-profit organizations.  He asked commissioners to be prepared with suggestions to revise the methodology for funding non-profit grant requests for future years, in light of concerns they raised last year.  His approach to formulating the list this year followed the process used in preceding years.

Gerrity also reported that he had decided to move forward with an engineer-build RFP for the Parking Lot B section of the proposed waterfront park. 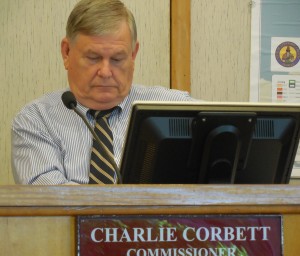 Mayor Boner asked that Gerrity first contact the engineering firm Zev Cohen for input, since that firm had engineered the entire park design.  Gerrity disagreed that such a step would resolve outstanding questions.  Commissioner Charlie Corbett said, “Let’s go with it.”  There were no other objections.

Commissioner Johnny Miller reminded commissioners and the public that this is a season for rip currents.  He asked that the city prepare educational literature for distribution to local hotels spelling out what to do if caught in a riptide.

Commissioner Corbett noted the openings of two new businesses:  Palate Restaurant and Cinnamon Bear.  He welcomed both to the city.

Vice Mayor Sarah Pelican raised concerns over the amount of time city staff is spending responding to voluminous public records requests.  She asked at what point the city should be charging fees equalling staff time spent meeting these requests.  City Clerk Caroline Best said that in light of recent state updates, she would research this item and report back to the commission.

Pelican also noted that only half the funding is in place for the July 4th fireworks.  She reminded commissioners and the public to send contributions in any amount to the Chamber of Commerce.

Mayor Boner asked that an update from the Nassau County Economic Development Board be placed on the agenda of a future meeting.

Both Mayor Boner and Commissioner Johnny Miller relayed positive comments received from new business owners about the ease of obtaining permits from city staff.  In addition to citing the friendliness of city staff, one business owner reported that of all the cities he had researched, Fernandina Beach seemed to be the only place that truly wanted his business.

Readers are reminded that all FBCC agenda packets are available during the week before the meeting on the city website fbfl.us.  Also, meetings are video streamed live through the website, where they remain available for viewing following the meetings.