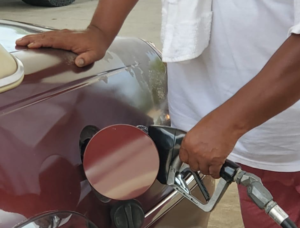 Prices at the pump are nowhere near the lows seen in March and April at the beginning of the COVID-19 outbreak. But the price for an average gallon of the fuel has dropped for the past two weeks after several weeks of increases or stabilization. The average price for a gallon of gas dropped 2 cents in the past week to about $2.06 across the Sunshine State.

The price drop comes as more people in the state are starting to reduce travel again and increase social distancing as coronavirus infections have bounced back in record numbers this month after a reprieve in May and June.

“Gas prices throughout the rest of the summer will continue to be influenced by COVID-19’s impact on demand, and the hurricane season’s potential to impact supply,” Jenkins said.

“Over the weekend, Hurricane Hanna made landfall in Texas, but stayed south of the region’s critical oil and gasoline infrastructure. A direct hit to the state’s southeastern coast could adversely affect the supply chain, leading to higher prices at the pump. For now, drivers should expect pump prices to be relatively stable this week,” Jenkins said.

Sunday’s gas prices in Florida represented the 18th consecutive day of declines in the state and some metropolitan markets have seen prices slip below $2 per gallon.

The highest price for a gallon of gas in Florida the past week was in West Palm Beach at $2.17. Tallahassee and Gainesville tied for second at $2.14.