“It’s the people of the State of Florida that make a difference, [in the manatee species]” said Nadia Gordon, Marine Mammal Research Biologist with the Florida Fish and Wildlife Conservation Commission, when reached via phone about the sighting of a manatee near the Amelia Island Marina, located just off the Shave Bridge.

A rescue crew descended upon the marina en masse on Wednesday, March 4, 2020, having been alerted to the appearance of a manatee the day before. Employees at the marina contacted the manatee hotline at 1-888-404-FWCC to report a manatee, possibly in distress. This distress state they feared is known as “cold stress syndrome.”

As lovers of this species most closely related to the elephant know, manatees migrate looking for warm water temperatures this time of year. Between 68 and 74 degrees is the temperature they desire. Blue Springs, Florida is perhaps the most popular gathering place for manatees (at times, over 500 have been counted!) but locals here on Amelia Island are particularly familiar with their presence around the warm-water discharges coming out of the Island’s manufacturing plants. 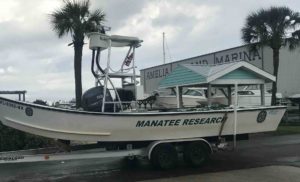 For the most part, that sort of behavior is just fine but sometimes, manatees can get it themselves into trouble as they travel further north – to say, South Carolina or Georgia, where they often “get stuck” in these warm water discharges, oblivious to the dropping temperatures in the channels that got them there.

So, what does a manatee in distress look like? Says Ms. Gordon, they will often have a white mark on tails or other extremities and their gastro-intestinal systems will shut down. An employee at the Amelia Island Marina took paddle to paddle board to investigate more closely and to get pictures. The manatee would respond by submerging itself – a good sign.

Upon closer inspection by the rescue crew, this particular manatee showed no signs of the dangerous “cold stress syndrome.” Its respiratory rate was good, its’ GI tract was working, it was defecating and feeding on seagrass. A rescue was not necessary. Ms. Gordon was quick to point out that the worst thing to do is to take a manatee NOT in distress out of its environment. The mission was called off.

Things to keep in mind when a manatee is spotted include these facts:
• Adults are much more able to withstand colder temperatures.
• Adult females are larger than the males and the average weight of manatees in general is about 1,000 pounds and they tend to be between 9-10 feet in length – the size of a golf cart.
• Younger manatees are smaller and due to a lack of experience, have more difficulty withstanding colder temps.
• Looking for love, in addition to food, is the main reason for migration.

In fact, there can be 20 males for every female and so one might chance upon a manatee who has “beached itself,” the scientific term of which is “tidally stranded.” Turns out, many females will engage in this behavior just to get away from the males and are perfectly capable of getting themselves back in the water. Unbeknownst to most, manatees can actually “pec-walk.”

Ms. Gordon identified some of best resources for more information on manatees and they are:

Should you see a manatee in distress, be sure to call the hotline at 1-888-404-FWCC. There are no fewer than three individuals tasked with answering that line.

Well done. Lots of good information. Usually they name these creatures that get so much attention?

It warms my heart to read that Amelia Islanders care about marine life, especially these amazing animals. Always glad to hear that manatees are being cared for.