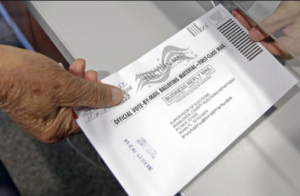 Meanwhile, in Florida, where mail-in voting is historically more popular with Republicans than Democrats, the state’s 67 county supervisors have encouraged voters to request mail-in ballots for the Aug. 18 primary and Nov. 3 general election.

“Voting by mail is a safe way to go. It’s a secure process in Florida,” Levy County Elections Supervisor Tammy Jones, who recently completed a stint as Florida Supervisors of Elections (FES) President, told Florida Phoenix. “In my 26 years of elections experience, I’ve seen no cases of fraud.”

In fact, FES, in April 7 and May 13 letters, asked Gov. Ron DeSantis to authorize supervisors to expand vote-by-mail and early voting options. As of Friday, they had not heard back.

Since 2002, Florida has been one of 27 “no-excuse” absentee states, where voters can request a mail-in ballot without explaining why they want to do so or having to prove they are absent from the state.

States such as California want to mail all voters ballots to ensure fears about exposure to the coronavirus does not inhibit residents from exercising their right to vote.

In Florida, however, voting by mail has been a popular option for nearly two decades, and it has benefitted Republican candidates.

In the 2016 presidential election, 1.08 million Florida Republicans voted by mail compared with 1.026 million Democrats. According to the Florida Division of Elections (DOE), 101,529 more Democrats than Republicans failed to return ballots.

Trump won Florida’s 29 electoral votes by 112,911 votes. The 54,000 advantage among mail-in voters and the more than 100,000 Democrats who did not return ballots were keys to his victory.

In Florida’s March 17 presidential primary, conducted as the COVID-19 emergency emerged, only 3 million of the state’s 9.93 million registered voters cast ballots – a 30.2 percent turnout amid a pandemic for two already-decided primary elections.

Trump also voted absentee in New York in the 2018 election. When asked how he can oppose mail-in voting, yet mail in his own ballots, the president said, “Because I’m allowed to. Because I happened to be in the White House, and I won’t be able to go to Florida and vote.”

Trump’s press secretary, Kayleigh McEnany, also is a Floridian who has voted by mail 11 times in the past decade.

“Absentee voting has the word absent in it for a reason,” McEnany told the Tampa Bay Times. “It means you’re absent from the jurisdiction or unable to vote in person.”

But that’s not true in at least 32 states, including Florida and five that mail all voters ballots. And it’s not something Florida Republicans want to change, said Mac Stipanovich, a veteran GOP strategist who left the party because of Trump.

“At least in Florida, I think he’s being a little misguided,” Stipanovich told NPR. “Absentee ballots are typically Republicans’ friends in Florida.”