Louise Bowers rarely misses a water aerobics class at the Fernandina Rec Center. She drives a shiny red PT Cruiser around town. She lives independently in her own home. She will celebrate her 100th birthday on Saturday, July 11.
Many call her friend….some call her Superwoman!

Louise Bowers was born in 1920 in Milledgeville, Georgia. She went to all-girls schools from Primary and Secondary school through High School and excelled at sports, especially basketball. She was named most athletic in high school. Following high school she worked at the local drug store in Milledgeville.

In 1940, Louise married Luke Bramlitt. “He was a great dancer,” she said with a big grin. The couple moved to Jacksonville shortly after their marriage and had two children. Her daughter Brenda calls her a “great cook….especially fried chicken, a dish always requested by her 5 grandchildren and 5 great grandchildren. She also was famous for her coconut cakes that she made with fresh coconut meat from the raw coconut.

Starting out as a worker at the local school, Louise ended up as the Assistant to the Superintendent of Schools of Duval County. She retired in 1984 and was feted with an enormous party of more than 200 co-workers and friends. She was very popular within the school.

Louise’s husband Luke passed away in 1961. She remarried in 1972 to Perkins Bowers. She said he was a fun guy and the two of them traveled extensively in the U.S. and Europe. Perkins passed away in 2007.

Her daughter Brenda said Louise had one serious boyfriend after that. “He wooed her with a computer. But she turned down his proposal because two marriages were enough.”

Other than breast cancer and a recent foot injury, Louise is healthy and sharp as a tack. She always says after a setback “you just have to move on.”

Today Louise says “is the happiest time of her life… a life filled with loved ones.” Her grandchildren and great-grandchildren visit often although they don’t live in the area. She cooks, loves to read mystery books and is a member of the First Presbyterian Church. She takes her car, and often pecan pies, to Steve Johnson Automotive where they never charge her a dime for their services. And, then there’s water dancing. She credits her longevity to her 5-day-a-week pool regiment.

A note from the author: As a fellow water dancer, I would like to say that Louise is my idol and inspiration. Her cheerful personality and bright outlook on life bring me peace each time I see her in the pool. Her fellow acquabotics friends had a party for her at the pool on Friday and a massive drive-by her house today. She is loved and is an example to many. 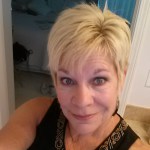 Karen moved to Fernandina Beach eight years ago after working in Chicago as a senior public relations specialist for the Midwestern regional office of the U. S. Environmental Protection Agency. Prior to that, she was an editor, columnist and writer for a chain of Chicago newspapers , an account executive for several Chicago public relations agencies and proprietor of her own pr/marketing business. She grew up and earned her journalism degree in Wisconsin.