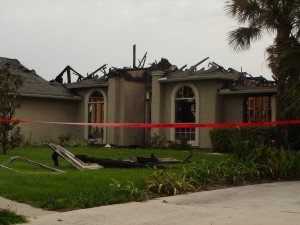 An intense lightning storm that moved through the area Thursday evening, resulted in total devastation to one Fernandina residence.  Fernandina Beach Fire Rescue arrived at the unoccupied home  shortly after 9:00 and for nearly two hours poured water on the home located at 860 Laguna in the Ocean View subdivision.

Mark Rozecki an across the street neighbor said, ” The storm was on top of us.  Suddenly I heard a big boom and the power went out.  Shortly after, I noticed a glow coming from my neighbor’s house.”

According to neighbors who gathered around the home this morning, the owners of the home are from the Chicago area. They were completing extensive work on the interior of the property.

When asked who called 911 to report the fire, one neighbor said  so many called that when she made the call the 911 line was busy.

The heat from the fire was so intense, a neighboring home to the north showed indications of melted siding.

As soon as the Fernandina Beach Fire and Rescue Department issues a press release, the Fernandina Observer will provide further information on this devastating fire.