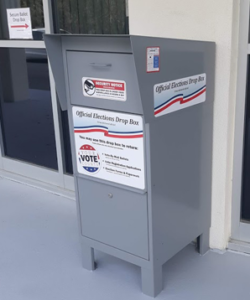 Under Florida statute, county supervisors can provide ballot drop boxes at their main office, branch offices and early voting sites during normal business hours, but they are not required to offer them at all.

For elections supervisors who opt to provide drop boxes, they have the discretion to do so at their offices and early voting sites if the boxes are monitored by an elections office employee or a sworn law enforcement officer “during operating hours.”

In his interpretation of the statute, Florida Supervisors of Elections attorney Ron Labasky said it does not address staffing or other requirements beyond “operating hours” at elections offices and early voting sites.

Labasky said the statute’s vague definition of “secure” provided elections supervisors with the discretion to determine how to best manage their accessibility and availability.

During the March presidential primary, about 20 counties offered 24/7 access to at least one ballot drop box, according to research by University of Florida Political Science professor Daniel A. Smith published in the Tampa Bay Times.

In the month since supervisors asked the state for guidance, 51 of the state’s county elections supervisors have moved ahead and provided 24/7 access to drop boxes for voters to deposit mail-in ballots, including some exclusively under video surveillance.

Sixteen counties, including some of Florida’s most populous such as Pinellas and Miami-Dade, have opted not to provide 24/7 drop-box access, although Pinellas County plans to install 25 drop boxes at various sites.

With early voting beginning Monday in many counties and 2.28 million Floridians already casting ballots via the mail, including many who deposited them in drop boxes, the requested guidance finally has been provided in the form of a memo Wednesday from Florida Department of State General Counsel Brad McVay.

McVay’s memo said ballot drop boxes must be staffed at all times when accessible, not just during “operation hours,” by an elections office employee, law enforcement officer or “credentialed poll watchers.”

Boxes can be placed indoors and outside of elections offices and early voting sites, McVay determined, but must be removed from polling places on Election Day.

The late guidance banning video surveillance could force some of the 51 counties offering 24/7 drop boxes to reduce locations or do away with them completely.

“This is a ham-handed effort to crack down on the ability of voters to safely drop off their mail ballots in person in secure locations, and I fully suspect the supervisors will ignore this guidance,” Smith told the Tampa Bay Times on Friday.

Citing legal rulings prohibiting changes in rules within weeks of elections, Pinellas County Supervisor of Elections Communications Director Dustin Chase said the county will move forward with its plan to install 25 ballot drop boxes at various sites, with many available 24/7 under video surveillance.

“While we appreciate the guidance to the state, we have already notified our voters about when and where they can drop off their mail ballots,” Chase said in a statement, “and that is our position.”