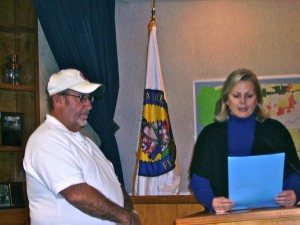 Mayor Sarah Pelican expressed the city of Fernandina Beach’s appreciation for the “loyal and conscientious efforts” expended by Richard “Kenny” Harris during his 31 years of employment with the city’s Parks and Recreation Department and the Maintenance Department.

During the January 2, 2013 Fernandina Beach City Commission meeting Mr. Harris’ proud family along with friends and coworkers were on hand to hear Mayor Pelican read a proclamation recognizing his service during his long tenure.