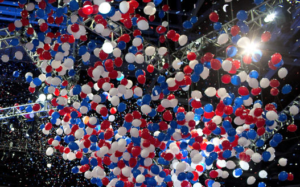 (The Center Square) – Jacksonville, Fla., increasingly is being cited as the front-runner to replace Charlotte, N.C., as the city where President Donald Trump will accept the Republican nomination for a second term in August.

Trump is expected to announce Thursday where the relocated Republican National Convention will be staged.

Last week, the president said North Carolina Gov. Roy Cooper “forced” him to move the Aug. 24-27 convention from Charlotte by asking the Republican National Committee (RNC) to plan for a “scaled-down” convention because of the COVID-19 emergency.

“Because of [Gov. Cooper], we are now forced to seek another State to host the 2020 Republican National Convention,” Trump tweeted.Florida Gov. Ron DeSantis and local leaders in Jacksonville, Miami and Orlando all have expressed eagerness to host the event, which could draw up to 50,000 people and generate $100 million in economic activity.

The Washington Post reported Tuesday that RNC officials were in Jacksonville on Monday looking at facilities, such as the 15,000-capacity VyStar Veterans Memorial Arena, and downtown hotel capacity.

“Seeking a city willing to allow a large-scale event amid the coronavirus pandemic, Republicans have tentatively settled on Jacksonville, Fla., as the new destination for the premier festivities of the Republican National Convention in August, according to three Republican officials briefed on the plans,” the Post reported late Tuesday night.

RNC Chairwoman Ronna McDaniel said Wednesday that Jacksonville is “absolutely in the front-running position” to host a revamped GOP convention.

According to the RNC, because of “contractual agreements,” it still will hold some portions of the convention in Charlotte, but the “performative aspects,” such as Trump’s acceptance speech, will happen elsewhere

“We are going to keep our convention of, the business of the convention, in Charlotte. That is for sure. It’s going to be smaller and scaled down” McDaniel said on The Hugh Hewitt Show. “And then we are looking for a different city for a celebration. There’s a couple more things we need to do before we can announce that, but Jacksonville is absolutely in the front-running position.”

Republican Party of Florida Chairman Sen. Joe Gruters confirmed in a series of tweets Wednesday that Jacksonville is the top choice for the replacing Charlotte.“While no final decision has been made by the RNC, we understand Jacksonville is a front-runner,” he said. “This certainly has been generating a lot of attention and excitement. We continue to believe that Florida would be the best place for the Convention.”

Gruters said the state and the city of Jacksonville safely can pull off the event even on relatively short notice.

“Florida is open for business and ready to roll out the red carpet. If selected, our goal would be to host a safe, secure & successful event,” he tweeted. “Florida has a lot to offer & also happens to be the home of @realDonaldTrump and America’s best Governor, @GovRonDeSantis.”

Jacksonville Mayor Lenny Curry, while marching in a Black Lives Matter demonstration with Jacksonville Jaguars football players Tuesday, said he knew little beyond what is being reported in the media.

“I don’t know what the RNC is going to do,” he told reporters.

Last week, Curry said the city has “been in discussion with” the RNC and said, as former state GOP chairman, he learned “what it takes” to host a convention when he organized the 2012 Republican National Convention in Tampa.

“We welcome the opportunity to host the GOP convention in Jacksonville,” he tweeted. “A $100 million local impact event would be important for our city as an event/convention destination. The City is ready for world class events & ready show the world we are open for business.”