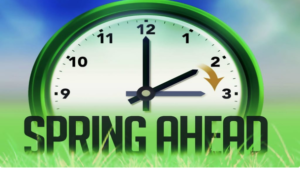 Get ready to spring forward on Sunday morning!

The road to adopting Daylight Savings Time (DST) has not been an easy one.  It was first introduced in the United States during World War I as an effort to conserve fuel.  It was very unpopular with farmers, who had less time to get their cows milked and produce to market.  After the War, Congress repealed DST over President Woodrow Wilson’s veto.  DST became a local option until President Franklin Roosevelt reestablished it during World War II.  It ended again in September 1945, at which time states again had the option to impose it. 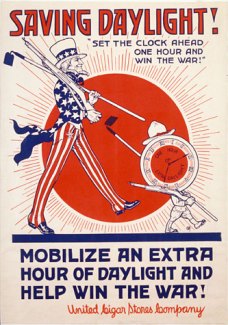 Due to heavy lobbying from the Transportation Agency, Congress passed the Uniform Time Act of 1966. Beginning in 1967, the act mandated standard time within the established time zones and provided for advanced time: Clocks would be advanced one hour beginning at 2:00 a.m. on the last Sunday in April and turned back one hour at 2:00 a.m. on the last Sunday in October. States were allowed to exempt themselves from DST as long as the entire state did so.

With the 1973 Oil Embargo, the law changed once again.  Congress enacted Public Law 93-182, which provided a trial period for year-round DST to run from January 6, 1974 to April 27, 1975.  The American public was not in agreement that this was a good idea.  Opponents expressed concerns about children walking to school in the dark and potential for more traffic accidents.  As a result of public pressure, following only one extension of the trial, the country returned to observing summer DST in those states where DST had been sanctioned.

Several other studies and changes were debated in subsequent years.  With the Energy Policy Act of 2005 the current timetable for beginning and ending DST was made official: DST begins on the second Sunday of March and ends on the first Sunday of November.  In years when April 1 falls on Monday through Wednesday, these changes result in a DST period that is five weeks longer; in all other years the DST period is instead four weeks longer.  Under the act, the Department of Energy was required to conduct an impact study, which revealed an nationwide energy savings for  the year of 2007 as 0.03 percent.  Other studies conducted independently have produced mixed results.

The debate on the value of DST continues, with some states continuing to advocate for year-round Daylight Savings Time.  Just this week Florida Senator Rick Scott announced that he is sponsoring a bill to make DST year round.

In the meantime, we all fiddle with our clocks and appliances twice a year, to make sure our coffee is being brewed at the right time and we get off to work at the proper time.

Stay tuned as the debate continues!