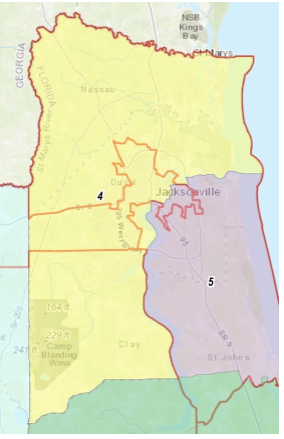 Florida Governor Ron DeSantis last week signed into law a Congressional redistricting plan drawn up by his staff, thereby rejecting the plan crafted by the Florida Senate and approved by various watchdog groups. The chief difference between products created by the Governor’s staff and that coming from the Legislature involved the treatment of minority-controlled seats. The 28-district map includes 20 districts in which Republican Donald Trump won the 2020 Presidential Election and eight where Democrat Joe Biden prevailed. Trump won Florida in 2020 by three percentage points.

While the new map leaves many candidates and incumbents living outside districts where they are filed, it’s important to note the law only required congressional representatives to live in their state, not their district.

According to an analysis provided by Jacob Ogles (FloridaPolitics.com) the presumed incumbent for the newly drawn District 4 is Rep. Al Lawson, whose former district was  dissolved during the redistricting process.  Ogles wrote, “The most controversial change DeSantis made in his map, this new CD 4 really stands in as the replacement to the Lawson seat. It’s hardly an analogous district though. The Black population in Jacksonville gets cleaved in half by the St. Johns River after DeSantis vetoed a map drawn by the Florida House that created a Duval-only Black seat. The Governor said using race as a motivating factor for drawing lines violates the equal protection clause. His map splits Duval and St. Johns counties and forms two GOP seats. This is the swinger seat at a mere Trump +7. The voting age population is 31.7% Black, compared to the 46.2% in Lawson’s existing district. Also, it scores just a 0.32 on Polsby-Popper, the second lowest compactness on the map for that measure. Who knows if Lawson runs. Jon Chuba, Lawson’s only opponent with more than $10,000 raised, actually now lives outside the district. State Sen. Aaron Bean, a Fernandina Beach Republican is exploring a bid.”

The new District includes all of Nassau and Clay Counties as well as a portion of Duval County. Had this Congressional District been in existence for the 2020 Election, its voters would have voted Trump 52.61%, Biden 45.92%.

Court challenges to the entire redistricting map are anticipated.

Our new district needs a great deal more reporting. Interesting that one need only live in the State not in the district you represent.