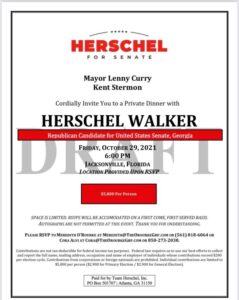 A Republican Senate candidate and college football legend will fundraise in Jacksonville later this month, hours before the Florida/Georgia football game.

Former Georgia Bulldog Herschel Walker, currently a candidate for the 2022 GOP nomination in the Senate race in the Peach State, is the guest of honor at what is billed as a “private dinner” on Oct. 29.

Hosting the dinner are two prominent Republicans: Jacksonville Mayor Lenny Curry, a former chair of the Republican Party of Florida who is again flashing his partisan chops as a serious regional player; and Kent Stermon, the COO of Total Military Management and someone who has close political and personal ties to Gov. Ron DeSantis.

There is a seating limit for this private dinner, and the location is to be announced. Contributions are capped at $5,800 per person.

As well, an interesting wrinkle. Even for those who shell out the full $5,800, “autographs are not permitted at this event.”

Walker’s Jacksonville fundraiser comes in the wake of reporting in the Atlanta Journal-Constitution that Walker had canceled an event in Georgia with a fundraiser who had assembled syringes in the form of a swastika in her Twitter profile as a protest against vaccine mandates. The Walker campaign distanced itself from the controversy Wednesday.

“Despite the fact that the apparent intent behind the graphic was to condemn government vaccine mandates,” the campaign told the AJC, “the symbol used is very offensive and does not reflect the values of Herschel Walker or his campaign.”

Walker has shown signs of being able to match the formidable fundraiser who holds the seat, Democratic Sen. Raphael Warnock, who won a Special Election earlier this year.

He has raised nearly $4 million in a still nascent campaign. Furthermore, Walker is the preferred candidate of former President Donald Trump, and is atop polls of the embryonic primary field.