We were in London when the Royal Wedding happened.  We told everyone that is why we were there, because Harry and Megan sent an invitation.  But that really isn’t true.  The paper the night before listed various places where the event would be screened, and we planned on Greenwich until we saw it required a boat or a train ride, 8 miles away.

We chose the Chelsea Physic Garden.  On the subway we asked a young woman where to get off.  We were discussing that when another young woman said she was going there and invited us to follow her.  She was Amelia, of all names, and had arrived the day before for a year of study in London, her second time here.  She is a Vancouver native but has traveled all over the world.  We followed her to the garden gate and saw a huge line, or queue, as the locals say, stretching around the block.   I had read that only 500 would be admitted, but the gate had just opened so we went to the end of the line.  Within ten minutes they announced the 500 had entered…. we would not be admitted. 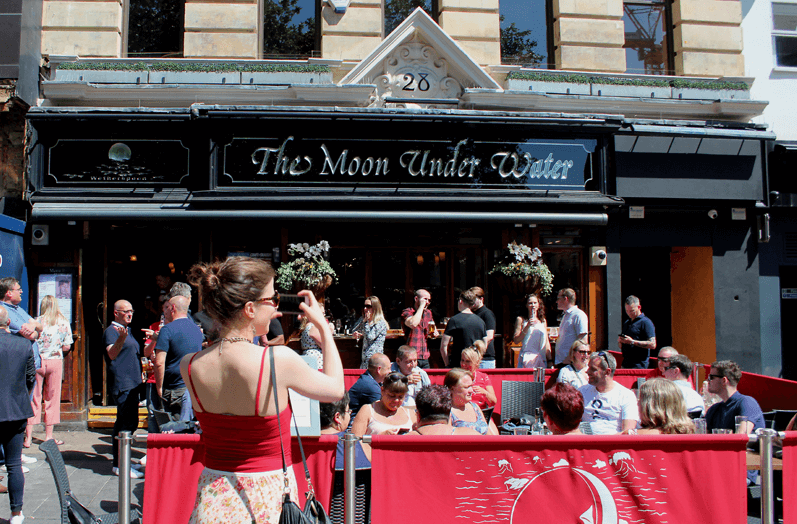 Amelia suggested we go to some of the Squares, there might be a screen or celebration there.  We hit Leicester and Trafalgar Squares.  Lots of street entertainers but no Harry and Megan viewing.  We continued to explore and found the Moon Under the Water pub, made famous by being the favorite of Orwell.  It was crowded at the outside seating but Amelia went in to explore…. she didn’t come back…. Susie went in…she didn’t come back.  I went in and found them in a large crowd at the end of the room where there was a TV showing the wedding, sitting with others on the floor.  Just then, a table came open and we grabbed it. 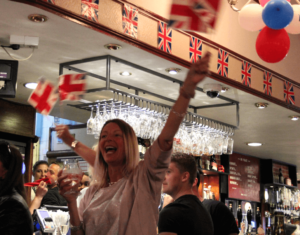 We ordered pub food…possibly for the last time voluntarily…. and saw the end of the wedding, their exiting the church where Harry kissed her, causing the pub crowd to break into a loud “God Save the Queen,” and wave the British flag.  Must be a DNA thing, it gave me chills.  I was about to start with, “Oh Say Can You See”… but Susie stopped me.

We completed the meal and left.  Amelia’s jet lag had caught up with her after all the wedding excitement and we parted ways.  We continued for a couple of more hours, visiting the National Portrait Gallery, then took the subway to our airbnb.  Very nice day.