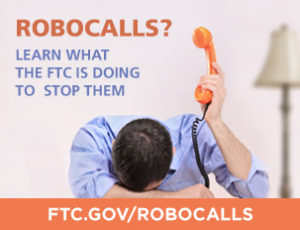 Have you noticed lately that you’re getting fewer robocalls? Yes, way too many calls are still coming, and we’re fully engaged on that issue. But we’re seeing some promising developments. Some recent FTC actions might just have something to do with that. Let’s review. In December 2019, the FTC filed suit against VoIP service provider Globex Telecom for helping scammers run a “reduce your credit card interest rate” con. In January, the FTC sent letters to 19 VoIP providers, warning them that consumer protection laws apply to them, too, and pointing out what could happen if they kept helping scammy telemarketers break the law. Then, just last week, the agency sent nine warning letters to VoIP providers that were helping Coronavirus scammers blast out robocalls during the current health crisis. The VoIP providers that straightened up accounted for billions of calls that we’re all now not getting.

But today, the FTC announced still more warning letters – this time, bringing partners from the FCC along to double down on enforcement. Three VoIP providers got the warning letters this time, but there’s a twist. This time, the two agencies also sent a letter to US Telecom — the industry’s trade association — that identifies the entities transmitted the illegal robocalls, and, if they haven’t cut it out in 48 hours, says the FCC will authorize providers to block traffic from them. So: either way, two days from now, there should be still fewer illegal robocalls trying to rip people off.

But back to the smaller number of robocalls we’re getting now. It’s actually more than a feeling, as FTC Do Not Call Registry data released today shows. If you check out the data, you’ll see that Do Not Call reports in December 2019 — right after the FTC’s Globex lawsuit — dropped by a whopping 25%, compared to December 2018. (That drop would be even greater except for the government shut-down in 2018 – in fact, calculating the drop based on complaints per day says there was a 32% drop.) And after the January round of VOIP warning letters, reports in February 2020 were more than 30% lower than the previous year. And March of 2020 had 53% fewer robocall reports than March of 2019. So: the FTC lays down the law to a bunch of VoIP providers…and reports of calls drop precipitously. Coincidence? You be the judge.

Nobody’s taking a full victory lap, because the fight goes on. We know you’re still getting calls. And though there’s a dent in the numbers, the FTC and its partner agencies won’t relent until we’ve won this battle.