Currently some 160 members strong, the Friends of Fort Clinch (FOFC) has been around since 1999. A 501(c)(3), this nonprofit can be described as a Citizen Support Organization. Its members do many things – promoting and assisting with educational programming and other special events and being instrumental in the expansion of the Park’s popular living history program. In addition, through grants and other fundraising efforts, the FOFC helps provide tools and other resources to assist park rangers in activities not otherwise funded by the State of Florida.

Many may recall the purchase and placement of the Civilian Conservation Corps (CCC) Worker Statue #71 near the Visitors Center. It honors the CCC Corps Company #1420. Company #1420 transformed an abandoned, sand-covered coastal fortification into today’s Fort Clinch, a state park welcoming thousands of visitors each year. It was the FOFC that raised more than $30,000 to purchase the statue. The installation was dedicated in a public ceremony two years ago.

Just last year, a new and very worthy fundraising campaign commenced at the suggestion of Park Manager, Heath Alboher – a Sea Turtle Adoption Program – created to fund the activities of the Sea Turtle Patrol at Fort Clinch. This adoption program is a symbolic effort to express support and provide financial assistance dedicated to the preservation, conservation and restoration efforts of this endangered species.

As anyone knows, the sea turtle and its many varieties – including the loggerhead, the green turtle or the leatherback are indeed near and dear to the hearts of thousands of Fernandina Beach residents.

This fundraising effort is designed to raise money for the purchase of a new beach buggy or another type of all-terrain vehicle (ATV), a critical component of the aforementioned efforts to help protect, conserve and restore the species.

The sand and the surf take their toll on these vehicles and consequently, they need to be replaced every five years. The average cost – $15,000 — and so the fundraising began last year and is now in full force.

Every day during the sea turtle nesting season, (which typically runs from May until October), the Fort Clinch Sea Turtle Patrol, comprised of both volunteers and rangers, scour the beach along the St. Mary’s Inlet and Atlantic shoreline in search of turtle tracks within the boundaries of this 1,400-acre state park.

The day is May 28, 2019 and already, nine loggerhead nesting areas have been identified on Fort Clinch property. Last year, 18 were marked in this small stretch of state park.

Sandra Baker-Hinton, a Friends of Fort Clinch board member, local artist and lover of marine life, is an outspoken advocate for sea turtles. She conducted her first turtle patrol expedition back in 2003 and has been doing it ever since.

She is both a spotter of turtle tracks and nests and a trainer of both new volunteers and official park rangers.

Important to note, however, is the fact that members of the Sea Turtle Patrol posse do more than search for turtle tracks and mark nests.

They are our “boots on the ground,” – dedicated to securing a healthy beach environment for all concerned. You will find them picking up trash and other items left behind (which pose dangers to beachgoers, fishermen and all sorts of marine life) and filling in deep holes dug in the sand. While fun for kids, these deep holes can impede — if not make completely impossible — the journey of a sea turtle in search of the perfect nesting ground.

But that’s not all. Members of the Sea Turtle Patrol are meticulous in their observations and report on even the slightest changes witnessed concerning the coastal environment of Fernandina Beach. Their observations are crucial to conservation efforts at the micro and macro level.

For example, Ms. Baker-Hinton recently became involved with tagging horseshoe crabs. Says Orlando.com, a news source from that city, “Horseshoe crabs play a vital role in
. . . marine food webs in Florida. Fish, shorebirds and turtles rely upon their eggs for food. They are scavengers, cleaning waters and recycling nutrients. They are a virtual nanny, carrying on their backs and bellies the offspring of many other marine creatures. Their very presence is a barometer of coastal health.”

What else might be found in the toolbox of a Sea Turtle Patrol vehicle, you might ask? Posts for planting in the sand, a magic marker to identify the nest on said post, a hammer to put that post in the ground, wire mesh for covering the nest to keep predators at bay and a stapler to affix signs to the posts reminding individuals that disturbing sea turtle nests is a violation of both state and federal law.

In addition, you’ll find a bucket for trash collection, a data collection notebook and a perhaps one of the latest and greatest (and most accurate) devices for helping this species recover – a Tremble TDC 100 handheld. A Tremble TDC100 can be described as a smartphone meeting a Global Navigation Satellite System (GNSS). This instrument, among other things, provides the exact coordinates of a nest location, an application for sketching and saving for posterity, the exact pattern of tracks (which helps to determine whether an actual nest was created or if the mama turtle decided to return to the sea, not yet happy with the location) and all sorts of other important information.

These items are rendered useless however, if they cannot be transported efficiently and effectively to where they need to be.

And that takes a special vehicle – which is exactly the goal of the latest fundraising effort most recently undertaken by the Friends of Fort Clinch.

Ultimately, it will go a long way in helping sea turtles – and not just efforts undertaken here on Amelia Island . . . but well beyond . . . beyond the boundaries of our Fort Clinch State Park. 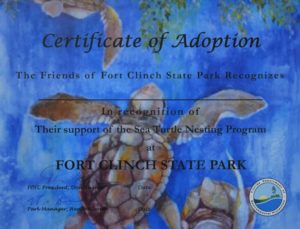 For just a $100 donation, contributors receive a certificate of adoption and membership to The Friends of Fort Clinch. Membership to the FOFC alone provides 12 free visits to the park for up to eight people. Add to that, you’ll receive updates on the Sea Turtle season and an exclusive invitation to a Sea Turtle nest excavation. Interested?

Sea turtles are among the oldest creatures on earth, having remained (essentially) unchanged for more than 100 million years.

The most common breed of the species that is the sea turtle in the State of Florida is the loggerhead, so named for its massive, block-like head.  The weight of an adult loggerhead sea turtle averages 275 pounds.

Sea turtles take decades to mature – not reproducing until they are between 20 and 30 years old.  Their lifespans are also similar to that of humans and some can live up to 50 years — or more.

Like salmon, sea turtles return to the nesting grounds where they were born.

Every “clutch” of a sea turtle may contain between 70-90 eggs.

The temperature of the nest determines the sex of the hatchlings.  Warmer temperatures produce more females.

After incubating for about 60 days, the eggs begin to hatch.  Two-inch hatchlings then begin to emerge, making their way to the sea.  The exodus begins at night, under the light of the moon.

The initial destination of hatchlings that actually make their way to sea is about 60 miles out – where they find a fertile feeding ground on sargassum mats.

Only about one in every 1,000 hatchlings live to adulthood.  Why?  Sea turtles are threatened by coastal development, encounters with pollutants and marine debris, drownings in fishing gear, and an international trade in turtle meat and products – often beyond the control and enforcement of US authorities.  Also heard tell of 20-30 sunglasses at a time washing onto the shores of Fort Clinch.  Suspected is the routine cleaning of cruise ships at sea.