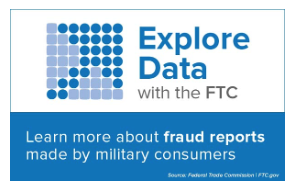 The Federal Trade Commission launched a new tool that explores data about problems military consumers may experience in the marketplace. For the first time, data about reports the FTC has received from active duty service members and veterans will be available online in an interactive dashboard at ftc.gov/explore data.

The military dashboard, which is updated quarterly, has a drop-down feature that shows data for “active duty,” “veterans and retirees,” and “all military.”

From 2015 through the first two quarters of 2020, reports received by the Consumer Sentinel Network showed the median fraud losses for veterans and retirees were $750. For active duty military, the top reported scam type was government imposters, followed by unwanted telemarketing calls. In addition, for “all military”—which includes military families and reservists—65.5 percent of people who reported online shopping problems reported losing money. Many online shopping reports are about merchandise ordered online that never arrives.

The FTC encourages military consumers to report challenges they face. Report scams to the FTC at ftc.gov/complaint.