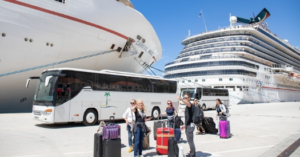 (The Center Square) – Seaports have been largely idled during the COVID-19 pandemic with Florida’s ports particularly devastated by the shutdown of the cruise and tourist industries and the decline in demand for steel and automobiles.

The American Association of Port Authorities and its state chapter, the Florida Ports Council (FPC), is among groups lobbying to secure relief for the nation’s maritime sector as part of the COVID-19 stimulus assistance package being debated by House Democrats and Senate Republicans this week in Washington, D.C.

“At this point, there have been no relief measures for ports included in the federal funding packages,” FPC President/CEO Doug Wheeler writes in a Thursday Florida Politics op-ed. “Across the state and nation, our ports are economic engines of our communities and will be key in getting the U.S. economy back on track.”

Florida has the nation’s second-largest maritime industry, which directly employs 66,000 Floridians, according to the Florida Maritime Partnership.

Florida’s seaports generate $117.6 billion annually in national economic impact and provide more than 900,000 direct and indirect jobs across the country, according to the FPC.

“Unfortunately, negative impacts from the pandemic continue to rise at our ports and in the communities our ports support,” Wheeler writes. “At this point, we believe there will be a decline of more than $700 million in direct spending, $620 million in wages, and 40,000 Florida jobs in connection with maritime business losses.”

The Miami Herald recently reported PortMiami, which annually handles more than 100 million tons of cargo, has lost hundreds of millions of dollars in fees and other revenue, imperiling the 60,000 direct and indirect jobs it supports.

According to the Florida Chamber of Commerce, more than 37 percent of goods manufactured in the U.S. is exported overseas through one of the Sunshine State’s 15 designated seaports.

Florida’s maritime industry has grown by 25 percent in less than a decade, according to a 2019 PricewaterhouseCoopers study, adding nearly 14,000 jobs since 2011.

A significant component of Florida’s maritime industry won’t be permitted to operate until at least mid-September.

The Centers for Disease Control and Prevention on March 13 banned cruising from U.S. ports. In July, the industry’s largest trade group, the Cruise Lines International Association (CLIA), implemented a voluntary “no sail” order through Sept. 15.

The order dashed hopes for a late-summer revival for Florida’s $8 billion cruise industry.

CLIA estimates that in 2016, the cruise industry’s direct expenditures in Florida created 149,020 jobs and $7.1 billion in wages and salaries.

“It is imperative that ports, like other businesses, receive the resources necessary to deal with these unprecedented challenges,” Wheeler writes. “Congress must pass legislation to provide the maritime sector the same protections and relief given to other industries during COVID-19 and close a huge gap in current federal emergency assistance that has left links in the maritime supply chain isolated and unable to access other assistance programs.”