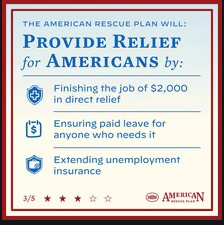 The state will receive $10.2 billion of that $17.6 billion with cities across the state expecting $1.4 billion, counties $4.1 billion and other local governments, such as water districts, set to collect about $1.3 billion.

Among differences In the American Rescue relief plan and last March’s $2.2 trillion Coronavirus Aid, Relief and Economic Security (CARES) Act is local governments with populations over 50,000 will be allocated the funds directly rather than the assistance being doled out by the state for all but the largest metropolitan areas.

Also unlike the CARES Act, under the American Rescue plan, local governments can use the non-recurring money to replace tax revenues and other dollars lost over the last year to balance their pandemic-stressed budgets – a provision opposed by Florida’s Congressional Republicans, most prominently by U.S. Sen. Rick Scott.

Last week, Scott sent a letter to governors and mayors across the nation describing any money an agency or government receives not directly spent on COVID-19 related expenses as “excess” that should be returned to the U.S. Treasury.

“I am writing you today with a simple and common-sense request: each state and local government should commit to reject and return any federal funding in excess of your reimbursable COVID-19-related expenses,” Scott wrote. “This commitment will serve the best interests of hard-working American taxpayers and will send a clear message to Washington: politicians in Congress should quit recklessly spending other people’s money.”

Meanwhile, how the state will spend its $10.2 billion will also vary from how the $6 billion in CARES Act money Florida receive was distributed exclusively under Gov. Ron DeSantis’ direction.

“We’re in session,” Sprowls said, “so we’ll be allocating the money during the budget process.”

Among ideas kicked around last week is to use about $2 billion to bolster the state’s unemployment trust fund to allow lawmakers to cut businesses’ unemployment tax.

“If we were to take a portion of that money – $1 billion to $2 billion – and put it into the unemployment compensation fund, then you’d be looking at a very large tax cut for businesses that are trying to reopen in this state,” Simpson said last week.

“It’s Florida. There’s 1,000, maybe 2,000 people a day moving here, so we need to get ahead of the curve on our road construction and water projects,” Simpson said.

DeSantis said he will push for money to be dedicated to the state’s flood control infrastructure and newly created sea-rise mitigation plan.

“I feel confident that as is, we’ll be able to put a lot of that money towards our Resilient Florida program,” DeSantis said. “It’s infrastructure we would have needed to have done anyways.”