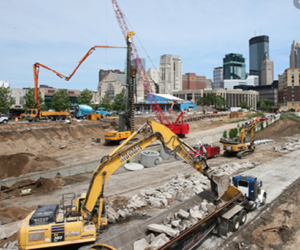 The plans allocate more than $1.5 billion in water quality projects, including Everglades restoration, and direct between $9-10 billion into resurfacing roads, improving railways and to repair and replace 18 bridges.

State investments in those priorities, and in addressing $21.9 billion in drinking water and $18.4 billion in wastewater needs, could see funding boosts from President Joe Biden’s proposed $3 trillion-plus Build Back Better infrastructure and American Jobs plans unveiled Wednesday in Pittsburgh.

Biden’s plan calls for $115 billion for bridges and highways which, according to the American Society of Civil Engineers (ASCE), could provide a much-needed stimulus to Florida’s efforts to keep pace with growing demands aggravated by an average of 1,000 new residents arriving a day.

According to ASCE’s annual Infrastructure Report Card, 13 percent of Florida’s 275,000 miles of roads are in poor condition, costing each driver $425 a year, and nearly 3 percent of the state’s 12,518 bridges “were structurally deficient” in 2019.

“Since 1984, the number of highway system miles has increased by 25 percent, while the daily vehicle miles traveled increased by 84 percent,” the report states. “In terms of keeping up with the demand, FDOT has fallen behind the curve, and the counties and cities have generally not kept up, either.”

Traffic patterns reveal a glaring inefficiency, the ASCE notes. The state’s Department of Transportation (DOT) manages 12,000 miles of state highways that “consists of only 10 percent of the road miles in Florida, (but) carries more than half of Florida’s total traffic.”

Biden’s proposed ‘Build Back Better’ plan calls for a $111 billion investment in water infrastructure and specifically cites a commitment to “protect and restore major land and water resources like Florida’s Everglades and the Great Lakes.”

The federal infrastructure plan could also dovetail with Florida’s investments in the 40-year, $8 billion Comprehensive Everglades Restoration Plan (CERP) approved by Congress in 2000.